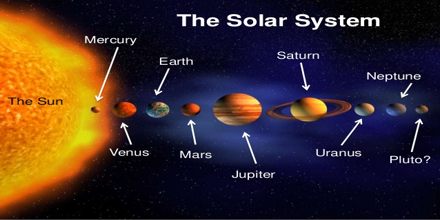 Lecture on Our Solar System

General purpose of this lecture is to present on our Solar System. Our solar system consists of an average star we call the Sun, the planets Mercury, Venus, Earth, Mars, Jupiter, Saturn, Uranus, Neptune, and Pluto. It includes: the satellites of the planets; numerous comets, asteroids, and meteoroids; and the interplanetary medium. Our solar neighborhood is an exciting place. The planets, most of the satellites of the planets and the asteroids revolve around the Sun in the same direction, in nearly circular orbits. When looking down from above the Sun’s north pole, the planets orbit in a counter-clockwise direction.