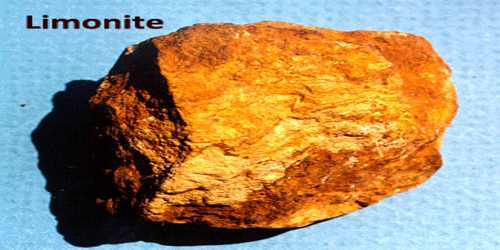 Limonite is a common brown, black, or yellow amorphous secondary mineral that consists of hydrated ferric oxides and is a source of iron. It is one of the major iron minerals, hydrated ferric oxide (FeO(OH)·nH2O). It was originally considered one of a series of such oxides; later it was thought to be the amorphous equivalent of goethite and lepidocrocite, but X-ray studies have shown that most so-called limonite is actually goethite. Limonite is one of the two principal iron ores, the other being hematite, and has been mined for the production of iron since at least 2500 BCE. It is extremely common and forms the coloring matter in many soils. It is also responsible for the coloring on the weathered surfaces of rocks. Much Limonite, especially the fibrous type, is either Goethite or altered Goethite that absorbed water in its chemical structure.

Limonite commonly forms as a pseudomorph over other minerals, especially Pyrite, Marcasite and Siderite. These pseudomorphs are very identifiable by their partial rusting look and yellow staining.

Occurrences and Properties of Limonite

The name limonite properly should be restricted to impure hydrated iron oxide that is colloidal, or amorphous, in character. Often brown and earthy, it is formed by alteration of other iron minerals, such as the hydration of hematite or the oxidation and hydration of siderite or pyrite. It probably bears the same relationship to iron oxides that wad and gummite do to manganese and uranium oxides. It is scientifically not considered a true mineral as it lacks a definitive chemical formula and crystal structure. However, all mineral reference guides list it together with other minerals. Limonite is a matrix base of many other minerals, and the term gossan is used as a reference to Limonite when it is used as a a matrix for another mineral or has formed an undesirable staining on top of it. Limonite usually forms from the hydration of hematite and magnetite, from the oxidation and hydration of iron rich sulfide minerals, and chemical weathering of other iron rich minerals such as olivine, pyroxene, amphibole, and biotite. It is often the major iron component in lateritic soils. It is often deposited in run-off streams from mining operations.

Limonite does not form in crystals. It occurs amorphous in earthy, massive, botryoidal, mammilary stalactitic and fibrous form. May also form as a pseudomorph after other minerals, especially Pyrite, Siderite, and Marcasite. Limonite in an ore of iron and is used as a pigment in the manufacture of paints. Besides for a few aesthetic lustrous botryoidal forms of Limonite, as well as the interesting pseudomorphs, Limonite is not of much interest to collectors.

One of the first uses was as a pigment. The yellow form produced yellow ochre for which Cyprus was famous, while the darker forms produced more earthy tones. Roasting the limonite changed it partially to hematite, producing red ochres, burnt umbers and siennas.

Limonite can be used in the production of iron and steel but this is much less common than for both Hematite and Magnetite.  It has been known to contain Nickel, however, and some producers have used the ore to make stainless steel.  It has been used extensively as a pigment in the past, forming yellow to brown hues and can still be used as a colouration in paints of other dyes.  It has also been used for prospecting as it can sometimes signify the presence of gold ore.