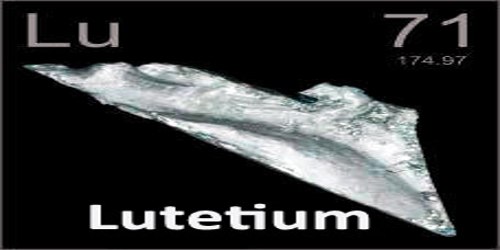 Lutetium is a silvery-white metallic element of the lanthanide series that is used in nuclear technology. It is the last element in the lanthanide series, and it is traditionally counted among the rare earths. Its atomic number 71; atomic weight 174.97; melting point 1,663°C; boiling point 3,395°C; specific gravity 9.840 (at 25°C); valence 3. Its radioactive isotope is used in determining the age of meteorites. The honour of discovering lutetium went to Georges Urbain at the Sorbonne in Paris, because he was the first to report it. The story began with the discovery of yttrium in 1794 from which several other elements – the rare earths (aka lanthanoids) – were to be separated, starting with erbium in 1843 and ending with lutetium in 1907.

Other chemists, namely Karl Auer in Germany and Charles James in the USA, were about to make the same discovery. Indeed James, who was at the University of New Hampshire, was ahead of Urbain and had extracted quite a lot of the new metal, but he delayed publishing his research. A sample of pure lutetium metal itself was not made until 1953.

Lutetium is not a particularly abundant element, although it is significantly more common than silver in the earth’s crust. It is usually occurs in association with the element yttrium and is sometimes used in metal alloys and as a catalyst in various chemical reactions.

Occurrences, Production and Properties of Lutetium

Lutetium occurs in rare-earth minerals such as laterite clays, xenotime, and euxenite. Though lutetium composes only trace mounts (less than 0.1 percent by weight) of the commercially important minerals bastnasite and monazite, it has proved feasible to extract the metal as a by-product. Lutetium is also found in the products of nuclear fission. In common with many other lanthanides, the main source of lutetium is the mineral monazite. It is extracted, with difficulty, by reducing the anhydrous fluoride with calcium metal. The abundance of lutetium in the Earth crust is only about 0.5 mg/kg. The main mining areas are China, United States, Brazil, India, Sri Lanka and Australia. The world production of lutetium (in the form of oxide) is about 10 tonnes per year. Pure lutetium metal is very difficult to prepare. It is one of the rarest and most expensive of the rare earth metals with the price about US$10,000 per kilogram, or about one-fourth that of gold.

Lutetium is separated by ion exchange. In this process, rare-earth ions are sorbed onto suitable ion-exchange resin by exchange with hydrogen, ammonium or cupric ions present in the resin. Lutetium salts are then selectively washed out by suitable complexing agent. Lutetium metal is then obtained by reduction of anhydrous LuCl3 or LuF3 by either an alkali metal or alkaline earth metal.

The metal is prepared by metallothermic reduction of the anhydrous halides by alkali or alkaline-earth metals. Lutetium is monomorphic and has a close-packed hexagonal structure with a = 3.5052 Å and c = 5.5494 Å at room temperature. Lutetium is used in research. Its compounds are used as hosts for scintillators and X-ray phosphors, and the oxide is used in optical lenses. The element behaves as a typical rare earth, forming a series of compounds in oxidation state +3, such as lutetium sesquioxide, sulfate, and chloride.

Aside from stable lutetium, its radioactive isotopes have several specific uses. The suitable half-life and decay mode made lutetium-176 used as a pure beta emitter, using lutetium which has been exposed to neutron activation, and in lutetium–hafnium dating to date meteorites. The synthetic isotope lutetium-177 bound to octreotate (a somatostatin analogue), is used experimentally in targeted radionuclide therapy for neuroendocrine tumors. Indeed, lutetium-177 is seeing increasing use as a radionuclide, in neuroendrocine tumor therapy and bone pain palliation.