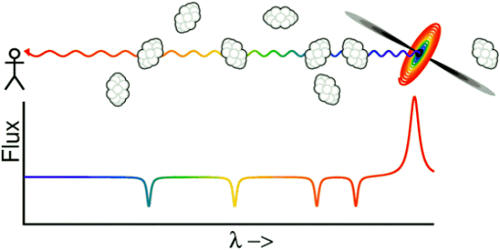 Lyman alpha systems are becoming a very useful source of information in physical cosmology. In astronomical spectroscopy, the Lyman-alpha forest is a series of absorption lines in the spectra of distant galaxies and quasars arising from the Lyman-alpha electron transition of the neutral hydrogen atom. The Lyman series is the series of energies required to excite an electron in hydrogen from its lowest energy state to a higher energy state. As the light travels through multiple gas clouds with different redshifts, multiple absorption lines are formed. It is common to see a series of absorption lines, called the Lyman alpha forest. Systems that are slightly more dense, Lyman limit systems, are thick enough that radiation doesn’t get into their interior.

For a neutral hydrogen atom, spectral lines are formed when an electron transitions between energy levels. The case of particular interest for cosmology is where a hydrogen atom with its electron in the lowest energy configuration gets hit by a photon (lightwave) and is boosted to the next lowest energy level. The Lyman series of spectral lines are produced by electrons transitioning between the ground state and higher energy levels (excited states). The Lyman-alpha transition corresponds to an electron transitioning between the ground state (n = 1) and the first excited state (n = 2). The Lyman-alpha spectral line has a laboratory, or rest, the wavelength of 1216 Å, which is in the ultraviolet portion of the electromagnetic spectrum. The reverse process can and does occur as well, where an electron goes from the higher n=2 energy state to the ground state, releasing a photon of the same energy.

The Lyman-alpha absorption lines in the quasar spectra result from intergalactic gas through which the galaxy or quasar’s light has traveled. Since neutral hydrogen clouds in the intergalactic medium are at different degrees of redshift (due to their varying distance from Earth), their absorption lines are observed at a range of wavelengths. Each individual cloud leaves its fingerprint as an absorption line at a different position in the observed spectrum.

Use as a tool in astrophysics

The Lyman-alpha forest is an interesting feature found in the spectra of sufficiently distant objects. It is an important probe of the intergalactic medium and can be used to determine the frequency and density of clouds containing neutral hydrogen, as well as their temperature. Searching for lines from other elements like helium, carbon, and silicon (matching in redshift), the abundance of heavier elements in the clouds can also be studied. This series of absorption lines extends over a range of frequencies, and are a result of the Lyman-alpha electron transition of neutral hydrogen in between the source and the observer. A cloud with a high column density of neutral hydrogen will show typical damping wings around the line and is referred to as a damped Lyman-alpha system.

For quasars at higher redshift, the number of lines in the forest is higher, until at a redshift of about 6, where there is so much neutral hydrogen in the intergalactic medium that the forest turns into a Gunn–Peterson trough. This shows the end of the reionization of the universe.

The Lyman-alpha forest observations can be used to constrain cosmological models.