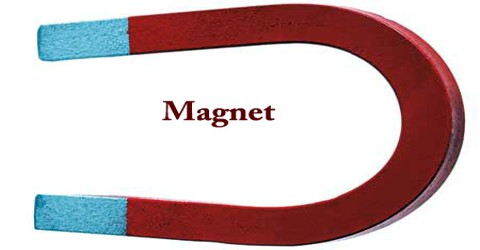 A magnet is an object made of certain materials which create a magnetic field. Magnet contains electrons that have both uneven orbits and uneven spins. Those magnetic atoms are aligned in nice straight rows inside each domain. And those domains are also lined up all in the same direction. And only with ALL of these conditions satisfied does this piece of metal become a magnet. Magnets are objects that have a north and south pole at opposite ends. Magnets are also used in a compass to guide people if they are lost. In fact, the compass was probably the first important magnetic device discovered. By the end of the 19th century all the known elements and many compounds had been tested for magnetism, and all were found to have some magnetic property. The most common was the property of diamagnetism, the name given to materials exhibiting a weak repulsion by both poles of a magnet. Some materials, such as chromium, showed paramagnetism, being capable of weak induced magnetization when brought near a magnet. This magnetization disappears when the magnet is removed. Only three elements, iron, nickel, and cobalt, showed the property of ferromagnetism.

An electromagnet is made from a coil of wire that acts as a magnet when an electric current passes through it but stops being a magnet when the current stops. Often, the coil is wrapped around a core of “soft” ferromagnetic material such as steel, which greatly enhances the magnetic field produced by the coil. The overall strength of a magnet is measured by its magnetic moment or, alternatively, the total magnetic flux it produces. The local strength of magnetism in a material is measured by its magnetization. Magnet is the natural substance that attracts the ferromagnetic substances like iron or nickel by the force of attraction. We can make the magnets in an artificial way also. They can be made of desired shape and size and of the desired magnetic field. There are so many uses of the magnets in our daily life and in the industries.

Magnets have their lot of applications in the daily life. The major 10 uses of the magnets are as follows: The use of the magnets in the medical sciences is very affective. We can use magnet therapy for the pain management without any use of the medicines. The magnets can stimulate the nerves in the human body and increase the blood circulation, which carries oxygen to the tissues. The magnets are used to heal the pains and the wounds of the athletes. Doctors uses the magnets to cure arthritis, gout, spondilitis and other problems related to the nervous system. Magnetic mattress is used for relaxing the body. In MRI we use the magnets. Magnets are used to cure the depression, headaches and migraines.

An electromagnet, in its simplest form, is a wire that has been coiled into one or more loops, known as a solenoid. When electric current flows through the wire, a magnetic field is generated. It is concentrated near and especially inside the coil, and its field lines are very similar to those of a magnet. The orientation of this effective magnet is determined by the right hand rule. The magnetic moment and the magnetic field of the electromagnet are proportional to the number of loops of wire, to the cross-section of each loop, and to the current passing through the wire. If the coil of wire is wrapped around a material with no special magnetic properties, it will tend to generate a very weak field. However, if it is wrapped around a soft ferromagnetic material, such as an iron nail, then the net field produced can result in a several hundred- to thousandfold increase of field strength.