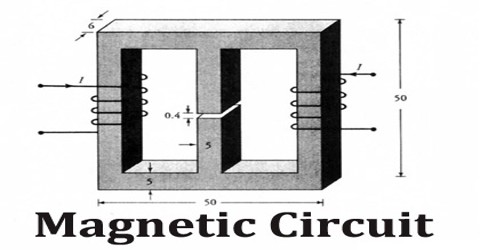 Magnetic circuits are used in various devices like the electric motor, transformers, relays, generators galvanometer, etc. Consider a solenoid was having N turns wound on an iron core. The magnetic flux of ø Weber sets up in the core when the current of I ampere is passed through a solenoid.

Some examples of magnetic circuits are:

Structure and Functions of Magnetic Circuits The magnetic flux is analogous to the electric current. The magnetomotive force, mmf, is analogous to the electromotive force and may be considered the factor that sets up the flux. The mmf is equivalent to a number of turns of wire carrying an electric current and has units of ampere-turns. If either the current through a coil (as in an electromagnet) or the number of turns of wire in the coil is increased, the mmf is greater; and if the rest of the magnetic circuit remains the same, the magnetic flux increases proportionally. The primary winding magnetic flux is able to excite / induce a magnetic flux density within the core material some 10000 times stronger than in air and it is this which allows the transformation of energy between the electric and magnetic fields.

In a step up transformer low voltage and high current is transformed to high voltage and low current and in so doing energy stored within the em fields are exchanged between the electric and magnetic fields but the total energy, and power, remains constant. A transformer allows the transfer and exchange of stored energy between the electric and magnetic fields it is the core material which makes this process significantly easier to due due to the property of the ferro-magnetic iron core material in aiding induction.

It is this exchange of energy between the electric and magnetic fields which allows us to exploit the properties of the conductors used in long transmission lines where such conductors are known to require very low internal electric field (volt drop). As such most of the energy is thus transferred within the electric field to allow much lower losses than if it same was done transferring the same amounts of energy stored in the magnetic field loss.