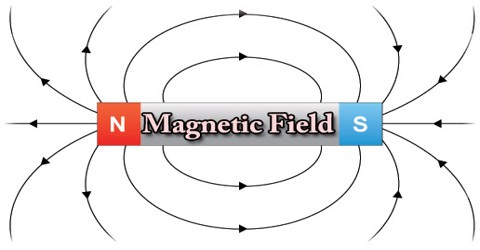 Magnetic fields force moving electrically charged particles in a circular or helical path. This force exerted on electric currents in wires in a magnetic field_underlies the operation of electric motors. It’s may be represented by continuous lines of force or magnetic flux that emerge from north-seeking magnetic poles and enter south-seeking magnetic poles. The density of the lines indicates the magnitude of the magnetic field. The direction of the flux is the direction in which the north-seeking pole of a small magnet points. The lines of flux are continuous, forming closed loops. For a bar magnet, they emerge from the north-seeking pole, fan out and around, enter the magnet at the south-seeking pole, and continue through the magnet to the north pole, where they again emerge. Electrostatic flux is impeded or blocked by metallic objects. Magnetic flux passes through most metals with little or no effect, with certain exceptions, notably iron and nickel. These two metals, and alloys and mixtures containing them, are known as ferromagnetic materials because they concentrate magnetic lines of flux. An electromagnet provides a good example. An air-core coil carrying direct current produces a magnetic field. If an iron core is substituted for the air core in a given coil, the intensity of the magnetic field is greatly increased in the immediate vicinity of the coil. If the coil has many turns and carries a large current, and if the core material has exceptional ferromagnetic properties, the flux density nears the ends of the core can be such that the electromagnet can be used to pick up and move cars. This generates a fluctuating electric field, which in turn produces another varying magnetic field. The result is a “leapfrog” effect, in which both fields can propagate over vast distances through space. Such a synergistic field is known as an electromagnetic field. The Hall Effect – Another good application of the force exerted by moving charges is the Hall Effect. The Hall Effect is very interesting, because it is one of the few physics phenomena that tell us that current in wires is made up of negative charges. It is also a common way of measuring the strength of a magnetic field. With an electric field, there is a potential difference across the wire that can be measured with a voltmeter. This is known as the Hall voltage, and in the case of the positive charges, the sign on the Hall voltage would indicate that the right side of the wire is positive. Although everything is made of atoms, most things don’t behave magnetically because the poles of the atoms are not aligned–the poles point in all different directions. Atoms have north and south magnetic poles–just like the Earth. When something aligns the atomic poles in a substance, the substance becomes magnetic. Electricity is one of the things that can align the poles of atoms.

Magnetic Levitation – Magnetic levitation, or Maglev, applies a property of disk drives to electric trains. If a train can ride just above the rail, on a magnet field, there will be very little friction and it will be easy to move the train. Naturally, the train could then run very fast. This is how the Japanese bullet train–Shinkansen–works. Because the trains are powered through the rails, it is easy to build the rails in blocks that allow only one train at a time to be on a block.