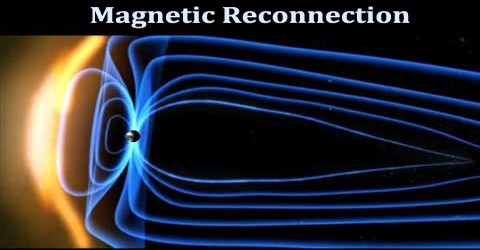 Magnetic Reconnection is a fundamental dynamical process (physical process) in highly conductive plasmas. In the process, magnetic field energy is converted to plasma kinetic and thermal energy. It occurs on timescales intermediate between slow resistive diffusion of the magnetic field and fast Alfvénic timescales. Magnetic Reconnection is a violation of an approximate conservation law in plasma physics, called the Alfvén’s Theorem, and can concentrate mechanical or magnetic energy in both space and time. Solar flares, the largest explosions in the Solar System, may involve the reconnection of large systems of magnetic flux on the Sun, releasing, in minutes, energy that has been stored in the magnetic field over a period of hours to days. Magnetic reconnection in Earth’s magnetosphere is one of the mechanisms responsible for the aurora, and it is important to the science of controlled nuclear fusion because it is one mechanism preventing magnetic confinement of the fusion fuel.

Reconnection is at the heart of many spectacular events in our solar system. The Earth’s own magnetic field is constantly perturbed by the impinging field from the sun also called the solar wind. During strong bursts, such as those caused by extraordinary solar flares reconnection can be induced in the near-Earth magnetotail a narrow magnetic field structure located on the night side many Earth-radii away. The tenuous plasma in that region is then accelerated down magnetic field lines into the Polar Regions, striking Earth’s atmosphere and exciting nitrogen and oxygen atoms as well as other atoms present in our atmosphere. The immediate de-excitation of these atoms then emits the wonderful and often intricate display of light we know as the aurora or northern (and southern) lights.

At a conference in 1956, Peter Sweet pointed out that by pushing two plasmas with oppositely directed magnetic fields together, resistive diffusion is able to occur on a length scale much shorter than a typical equilibrium length scale. Eugene Parker was in attendance at this conference and developed scaling relations for this model during his return travel. Lazarian and Vishniac (1999) considered the magnetic reconnection in the presence of a random component of magnetic field in a totally ionized and inviscid plasma assuming that the resistive effects could be described with an Ohmic resistivity. For the turbulent flow in the reconnection region a model for magnetohydrodynamic turbulence should be used such as the model developed by Goldreich and Sridhar in 1995. One can imagine that within small scales of the turbulent flow, the Sweet-Parker model is applicable. Lazarian and Vishniac showed that, in general, this cannot affect the final result. In fact, their model is independent of small scale physics which determines the local reconnection rate.

The Earth’s Magnetosphere and Solar Atmosphere –

It occurs during solar flares, coronal mass ejections, and many other events in the solar atmosphere. The observational evidence for solar flares includes observations of inflows/outflows, downflowing loops, and changes in the magnetic topology. In the past, observations of the solar atmosphere were done using remote imaging; consequently, the magnetic fields were inferred or extrapolated rather than observed directly. The confinement of plasma in devices such as tokamaks, spherical tokamaks, and reversed field pinches requires the presence of closed magnetic flux surfaces. By changing the magnetic topology, magnetic reconnection degrades confinement by disrupting these closed flux surfaces, allowing the hot central plasma to mix with cooler plasma closer to the wall.