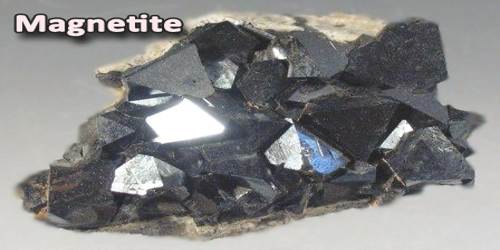 Magnetite is a brown to black mineral that is strongly magnetic. It crystallizes in the cubic system and commonly occurs as small octahedrons. Magnetite occurs in many different types of rock and is an important source of iron. Its chemical formula Fe3O4, and it is one of the oxides of iron. Magnetite is very easy to identify. It is one of just a few minerals that are attracted to a common magnet. It is a black, opaque, submetallic to metallic mineral with a Mohs hardness between 5 and 6.5. It is often found in the form of isometric crystals. It is the most strongly magnetic mineral found in nature.

Magnetite may form a yellow-brown rust coating if washed or kept in a moist area. If a specimen is washed, it should be dried to prevent rusting. Rust can easily be removed by soaking the Magnetite in a rust-removing solvent such as Iron Out.

Occurrences and Properties of Magnetite

Magnetite is a common mineral. Much commercially-mined Magnetite is of massive form and lacks interest to collectors. It is sometimes found in large quantities in beach sand. Such black sands (mineral sands or iron sands) are found in various places, such as Lung Kwu Tan of Hong Kong, California of the United States and the west coast of the North Island of New Zealand. Large deposits of magnetite are also found in the Atacama region of Chile, Valentines region of Uruguay, Kiruna, Sweden, the Pilbara, Midwest and Northern Goldfields regions in Western Australia, New South Wales in the Tallawang Region, and in the Adirondack region of New York in the United States. Kediet ej Jill, the highest mountain of Mauritania, is made entirely of the mineral. Deposits are also found in Norway, Germany, Italy, Switzerland, South Africa, India, Indonesia, Mexico, Hong Kong, and in Oregon, New Jersey, Pennsylvania, North Carolina, West Virginia, Virginia, New Mexico, Utah, and Colorado in the United States.

Magnetite crystals are usually octahedral, and they may be very well-formed. Less commonly dodecahedral. Crystals may exhibit interesting combinations of octahedral and dodecahedral faces. Spinel twinning is an occasional habit, and an unusual cubic form is well-known from one specific locality. Crystals may be striated, and some octahedral crystals contain layer growths. Also drusy, grainy, in veins, as large embedded grains, as rounded crystals, and massive. Magnetite is an important ore of iron. Well formed crystals are popular among mineral collectors, and the magnetic Lodestone variety is frequently sold in hobby shops to amateur collectors. Magnetite is also of significant interest to the science community due to its strong magnetic properties. The abrasive known as “emery” is a natural mixture of magnetite and corundum. Some synthetic emery is produced by mixing magnetite with aluminum oxide particles. The production of synthetic emery gives the manufacturer control over the particle size and the relative abundance of aluminum oxide and magnetite in the product. Small amounts of magnetite are also used as a toner in electrophotography, as a micronutrient in fertilizers, as a pigment in paints, and as an aggregate in high-density concrete.

Tiny crystals of magnetite are present in many rocks. In the crystallization of an igneous rock, tiny crystals of magnetite form in the melt, and because they are magnetic, they orient themselves with the direction and polarity of Earth’s magnetic field. This preserves the orientation of Earth’s magnetic field within the rock at the moment of crystallization.