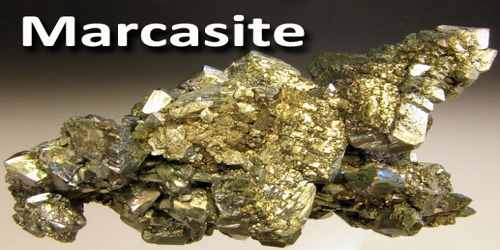 Marcasite is a light yellow to gray, metallic, orthorhombic mineral. Its chemical formula: FeS2 and sometimes called white iron pyrite. Marcasite is a polymorph of pyrite and looks similar to it but has a lower specific gravity, is paler in color, and often has a radiating fibrous structure. It is physically and crystallographically distinct from pyrite, which is iron sulfide with cubic crystal structure. Both structures do have in common that they contain the disulfide S22− ion having a short bonding distance between the sulfur atoms. Marcasite is lighter and more brittle than pyrite. Specimens of marcasite often crumble and break up due to the unstable crystal structure. The structures differ in how these di-anions are arranged around the Fe2+ cations. Marcasite is lighter and more brittle than pyrite. Specimens of marcasite often crumble and break up due to the unstable crystal structure.

The Ancient Incans, Greeks and Egyptians all valued marcasite. It was not uncommon to see Cleopatra herself adorned in marcasite gemstones. Marcasite was especially popular in the 18th and 19th centuries of Edwardian jewelry when it was most commonly cut into tiny stones and set in sterling silver. The Art Nouveau period and The Gilded Age weren’t shy about using marcasite, often creating jewelry with tiny marcasite gems alongside pearls, diamonds or brightly colored gems. A resurgence of interest in vintage jewelry brought marcasite to heightened popularity again during the 1990s and on.

Occurrences and Properties of Marcasite

Marcasite is iron sulfide with an orthorhombic crystal structure. It is not uncommon for marcasite to be confused for pyrite. Pyrite is iron sulfide with a cubic crystal structure. So while these stones have the same chemical formula with short bonding distances between sulfur atoms, the structures differ in how exactly they bond. Marcasite is also less common than pyrite and tends to weigh slightly less. As a primary mineral it forms nodules, concretions and crystals in a variety of sedimentary rock, such as in the chalk layers found on both sides of the English Channel at Dover, Kent, England and at Cap Blanc Nez, Pas De Calais, France, where it forms as sharp individual crystals and crystal groups, and nodules.

Marcasite is the most prevalent mineral to experience a condition known as pyrite decay, in which a specimen will slowly disintegrate into a white powder. Little is known about this detrimental condition. It only effects certain specimens at random, while other specimens remain unaffected.

Metaphysical properties of marcasite also suggest it is a stone that inspires creativity when it comes to the arts and architecture. The stone helps fight intellectual fatigue, making it a favorite for students who are studying for big tests. Its crystal forms are usually as bipyramidal and tabular crystals, commonly in coxcomb aggregates and bladed. Crystals frequently form curved formations as well as herringbone patterns. It also occurs massive, radiating, mammilary, encrusting, nodular, as groups of small crystals, and in radiating discs known as dollars. Commonly forms as pseudomorphs over other minerals and fossils, resulting in bizarre shapes and forms.

Applications, Varieties and Blends of Marcasite

Marcasite is said to be a gemstone used for powerful meditation. Marcasite gems aid in introspection and tend to resonate more strongly with higher, more spiritual chakras. According to many beliefs, marcasite is a talisman associated with wisdom, courage and expression. It is a gemstone that requires a little more attention to care and cleaning than others. Marcasite gems can tarnish when exposed to high humidity, so it’s best to not submerge the stone in water or use steam cleaners and boiling methods. Harsh chemicals can dull the shine of marcasite. To clean marcasite, gently wipe with a very soft, damp cloth. Dry with a clean, soft and absorbent cloth that does not contain rouge or other impregnations. Ensure the stone and surrounding settings is completely dry. It is best to store marcasite jewelry in low-humidity conditions alongside an anti-tarnish strip.

Most commonly, marcasite is combined with polished or antiqued sterling silver for a sophisticated air. Black gemstones such as onyx, jet and spinel are favorites for pairing with marcasite gemstones. The silvery glint of marcasite creates heightened drama alongside these black-colored gems. Harkening back to the Gilded Age, marcasite is also a favorite to use in conjunction with pearls of all colors from bright white to creamy pastels as well as darker hues like Bordeaux.