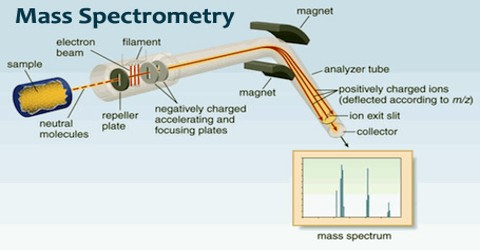 Mass Spectrometry (MS) is a technique for the analysis of a substance in which the molecule is subjected to bombardment by high-energy electrons or atoms to cause ionization and fragmentation to give a series of ions in the gas phase that constitutes the fragmention pattern observed by using a mass spectrometer. It is a process, which used to identify chemicals in a substance by their mass and charge. Mass spectrometers are instruments that measure mass and charge of molecules. A mass spectrometer also can determine how much of a compound is present in a mixture. Also known as mass spectroscopy. The instrument used in MS is called mass spectrometer. It produces a mass spectrum that plots the mass-to-charge (m/z) ratio of compounds in a mixture. Mass spectrometry is used in many different fields and is applied to pure samples as well as complex mixtures.

Mass Spectrometry (MS) is used for both qualitative and quantitative chemical analysis. It may be used to identify the elements and isotopes of sample, to determine the masses of molecules, and as a tool to help identify chemical structures. It can measure sample purity and molar mass.

A mass spectrometer generates multiple ions from the sample under investigation; it then separates them according to their specific mass-to-charge ratio (m/z), and then records the relative abundance of each ion type. The first step in the mass spectrometric analysis of compounds is the production of gas phase ions of the compound, basically by electron ionization. This molecular ion undergoes fragmentation. Each primary product ion derived from the molecular ion, in turn, undergoes fragmentation, and so on. The ions are separated in the mass spectrometer according to their mass-to-charge ratio, and are detected in proportion to their abundance. A mass spectrum of the molecule is thus produced. It displays the result in the form of a plot of ion abundance versus mass-to-charge ratio. Ions provide information concerning the nature and the structure of their precursor molecule. In the spectrum of a pure compound, the molecular ion, if present, appears at the highest value of m/z and gives the molecular mass of the compound.

Mass Spectrometry (MS) has emerged as an indispensable method for the characterization and sequencing of different proteins. It has gained popularity for protein analysis due to its ability to tackle the intricacies underlying the proteome. The three fundamental applications of the technique in proteomics are determining protein interactions, categorizing protein expression, and locating sites of protein modification. Mass Spectrometry (MS) represents a powerful technique with a myriad of different applications in biology, chemistry, and physics, but also in clinical medicine and even space exploration. It is used to determine the molecular weight of compounds by separating molecular ions on the basis of their mass and charge. Various types of mass spectrometry with high specificity are being increasingly utilized as tools in the clinical laboratory, but also in different research settings.

There are also space-related applications of mass spectrometry, two important ones being observing air quality of manned space mission and examining the composition of planetary atmospheres. The success of its use in planetary missions can be attributed to space vacuum that can be used to decrease resource demands.

Mass Spectrometry has also played a pivotal role in many phases of drug discovery. Drug reaction optimization, structural analysis of library products, and the evaluation of library compound quality are just few examples of how this technique can be employed. It is also becoming increasingly used in geologic research for petroleum composition measurement and carbon dating. The technique can also be used to test water quality or potential food contamination.

How a Mass Spectrometr Works?

The three main parts of a mass spectrometer are the ion source, the mass analyzer, and the detector.

Ionization – The initial sample may be a solid, liquid, or gas. The sample is vaporized into a gas and then ionized by the ion source, usually by losing an electron to become a cation. The ionization chamber is kept in a vacuum so the ions that are produced can progress through the instrument without running into molecules from air. Ionization is from electrons that are produced by heating up a metal coil until it releases electrons.

Acceleration – In the mass analyzer, the ions are then accelerated through a potential difference and focused into a beam. The purpose of acceleration is to give all species the same kinetic energy, like starting a race with all runners on the same line.

Deflection – The ion beam passes through a magnetic field which bends the charged stream. Lighter components or components with more ionic charge will deflect in the field more than heavier or less charged components.

Detection – A detector counts the number of ions at different deflections. The data is plotted as a graph or spectrum of different masses. Detectors work by recording the induced charge or current caused by an ion striking a surface or passing by.