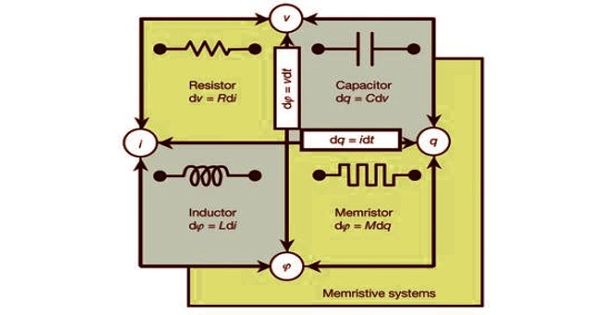 The term Memristor is a passive device that provides functional relation between charge and flux. It is a non-linear two-terminal electrical component relating to electric charge and magnetic flux linkage. It is defined as a circuit element in which flux(φ) between two terminals is a function of the amount of charge(q) passed through the two-terminal device. These are semiconductors used for jointing passive components to form a fourth component, and the resistance is named memristance. It is a resistance that depends on the charge in memristor circuits & the resistance unit is the ohm.

It was described and named in 1971 by Leon Chua, completing a theoretical quartet of fundamental electrical components that comprises also the resistor, capacitor, and inductor. It is a non-volatile electronic memory device, as the fourth fundamental two-terminal circuit element following the resistor, the capacitor, and the inductor. Memristors would not totally supplant transistors but would supplement them in computer memories and logic circuits, and might also bring some form of analog information processing back into the world of computing.

The device memristor is known as charge controlled device when relationship between flux and charge is represented as function of electric charge (q) i.e. φ = f(q)

It is known as flux controlled memristor when the relationship is expressed as a function of flux linkage i.e. q = f(φ)

Chua and Kang later generalized the concept to memristive systems. The memristor switch performance was revealed by the scientists of HP lab while they were trying to discover the crossbar switches. Such a system comprises a circuit, of multiple conventional components, which mimics key properties of the ideal memristor component and is also commonly referred to as a memristor. The memristors are also known as matrix switches because it is mainly used for connecting several inputs as well as outputs in the form of a matrix. Several such memristor system technologies have been developed, notably ReRAM.

Its special property is that its resistance can be programmed (resistor function) and subsequently remains stored (memory function). The identification of memristive properties in electronic devices has attracted controversy. Memristors are virtually immune from radiation, which can disrupt transistor-based technologies. Experimentally, the ideal memristor is yet to be demonstrated. Also, memristors can enable computers that turn on and off like a light switch.