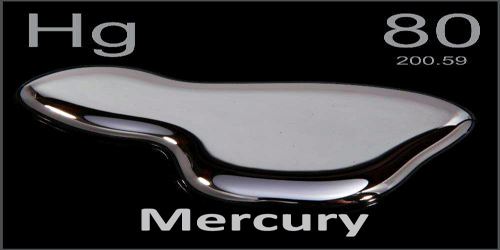 Mercury is a silvery-white, dense, poisonous metallic element that is a liquid at room temperature and is used in thermometers, barometers, batteries, and pesticides. It occurs in deposits throughout the world mostly as cinnabar (mercuric sulfide). The red pigment vermilion is obtained by grinding natural cinnabar or synthetic mercuric sulfide. Its atomic number 80; atomic weight 200.59; melting point -38.87°C; boiling point 356.58°C; specific gravity 13.546 (at 20°C); valence 1, 2. Like a few other elements, mercury has a chemical symbol, Hg that bears no resemblance to its name. This is because Hg is an abbreviation of the Latin name of the element, which was hydrargium. This word in turn was taken over from Greek, where it literally meant “water-silver.”

Elemental or metallic mercury is a shiny, silver-white metal and is liquid at room temperature. It is used in older thermometers, fluorescent light bulbs and some electrical switches. When dropped, elemental mercury breaks into smaller droplets which can go through small cracks or become strongly attached to certain materials. At room temperature, exposed elemental mercury can evaporate to become an invisible, odorless toxic vapor. If heated, it is a colorless, odorless gas. Occurrences and Properties of Mercury

Mercury occurs in Earth’s crust on the average of about 0.08 gram (0.003 ounce) per ton of rock. The principal ore is the red sulfide, cinnabar. Native mercury occurs in isolated drops and occasionally in larger fluid masses, usually with cinnabar, near volcanoes or hot springs. Over two-thirds of the world supply of mercury comes from China, with most of the remainder coming from Kyrgyzstan and Chile; it is often a by-product of gold mining. Extremely rare natural alloys of mercury have also been found: moschellandsbergite (with silver), potarite (with palladium), and gold amalgam. Mercury does not react with most acids, such as dilute sulfuric acid, although oxidizing acids such as concentrated sulfuric acid and nitric acid or aqua regia dissolve it to give sulfate, nitrate, and chloride. Like silver, mercury reacts with atmospheric hydrogen sulfide. Mercury reacts with solid sulfur flakes, which are used in mercury spill kits to absorb mercury. Applications and Effects of Mercury

The use of mercury in the manufacture of chlorine and caustic soda (sodium hydroxide) by electrolysis of brine depends upon the fact that mercury employed as the negative pole, or cathode, dissolves the sodium liberated to form a liquid amalgam. An interesting application, though not of great commercial significance, is the use of mercury vapour instead of steam in some electrical generating plants, the higher boiling point of mercury providing greater efficiency in the heat cycle. Mercury becomes a problem for the environment when it it is released from rock and ends up in the atmosphere and in water. These releases can happen naturally. Both volcanoes and forest fires send mercury into the atmosphere.

Human activities, however, are responsible for much of the mercury that is released into the environment.  The burning of coal, oil and wood as fuel can cause mercury to become airborne, as can burning wastes that contain mercury.