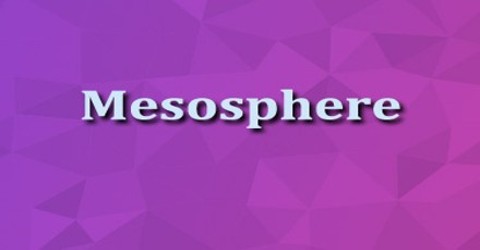 Mesosphere is the region of the Earth’s atmosphere lying above the stratosphere and below the thermosphere, from a height of about 50 km (31 mi) to about 80 km (50 mi) above the Earth’s surface. In the mesosphere temperatures decrease with increasing altitude due to the decreasing absorption of ultraviolet radiation from the Sun. At the top of this region temperatures are around -95°C (-135.4°F). Most of the meteors that enter Earth’s atmosphere burn up while passing through the mesosphere. The stratosphere, mesosphere and lowest part of the thermosphere are collectively referred to as the “middle atmosphere”, which spans heights from approximately 10 kilometres (33,000 ft; 6.2 mi) to 100 kilometres (62 mi; 330,000 ft). The mesopause, at an altitude of 80–90 km (50–56 mi), separates the mesosphere from the thermosphere—the second-outermost layer of the Earth’s atmosphere. It is directly above the stratosphere and below the thermosphere. It extends from about 50 to 85 km (31 to 53 miles) above our planet. Temperature decreases with height throughout the mesosphere. The coldest temperatures in Earth’s atmosphere, about -90° C (-130° F), are found near the top of this layer.

The mesosphere layer protects the planet Earth from the celestial rocky masses that enters the atmospheric envelope of the Earth, where they burn as a result of their friction with the air molecules, and forming luminous meteors.

Although the meteors are burnt in the mesosphere layer, the spaceships can not burnt during their passing in it as their conical fronts disperse the heat and their tails are made of an insulated material. The word ‘mesosphere’ is derived from the Greek words ‘mesos sphaira’ that literally translate to ‘middle sphere’. The mesosphere is too high for weather balloons or airplanes and too low for satellites, making it difficult to study, however scientists are able to use research rockets capable of short trips for specific experiments. Some Interesting Mesosphere Facts are:

The main dynamic features in this region are strong zonal (East-West) winds, atmospheric tides, internal atmospheric gravity waves, and planetary waves. Most of these tides and waves start in the troposphere and lower stratosphere, and propagate to the mesosphere. In the mesosphere, gravity-wave amplitudes can become so large that the waves become unstable and dissipate. This dissipation deposits momentum into the mesosphere and largely drives global circulation.