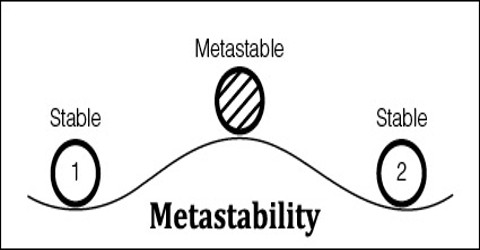 Metastability is the quality of a physical system that persists in its existing equilibrium when undisturbed or only slightly disturbed, but able to pass to a more stable equilibrium when sufficiently disturbed. A common example of metastability in science is isomerisation. Higher energy isomers are long lived as they are prevented from rearranging to their preferred ground state by (possibly large) barriers in the potential energy. It is common in physics and chemistry, from an atom to statistical ensembles of molecules at molecular levels or as a whole. The abundance of states is more prevalent as the systems grow larger and/or if the forces of their mutual interaction are spatially less uniform or more diverse. The metastability concept originated in the physics of first-order phase transitions. It then acquired new meaning in the study of aggregated subatomic particles, in atomic nuclei or in atoms or in molecules, macromolecules or clusters of atoms and molecules. Later, it was borrowed for the study of decision-making and information transmission systems. Whenever setup and hold violation time occurs, metastability occurs, so we have to see when signals violate this timing requirement:

Designers can tolerate metastability by making sure the clock period is long enough to allow for the resolution of quasi-stable states as well as whatever logic may be in the path to the next flip-flop. This approach, while simple, is rarely practical given the performance requirements of most modern designs. It always stems from violating setup or hold times, which in turn comes from either poor design or asynchronous inputs. Every logic component takes time to propagate data. When a signal traverses many devices, the delays can add up significantly. If the data then goes to a latch, it’s quite possible that the delays may cause the input to transition at the same time as the clock. Instant metastability. Designers are generally pretty careful to avoid these situations, though.