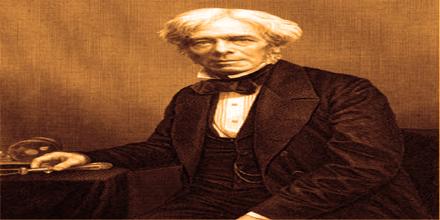 Michael Faraday, Physicist was born September 22, 1791, Newington, Surrey, England. He was an English scientist who contributed to the study of electromagnetism and electrochemistry. His main discoveries include the principles underlying electromagnetic induction, diamagnetism and electrolysis. When Faraday was thirteen years old he had to find work to help the family finances and he was employed running errands for George Riebau who had a bookselling business. In 1805, after a year as an errand-boy, Faraday was taken on by Riebau as an apprentice bookbinder. He spent seven years serving his apprenticeship with Riebau. Not only did he bind books but he also read them. Faraday received little formal education, he was one of the most influential scientists in history. It was by his research on the magnetic field around a conductor carrying a direct current that Faraday established the basis for the concept of the electromagnetic field in physics. As a chemist, Faraday discovered benzene, investigated the clathrate hydrate of chlorine, invented an early form of the Bunsen burner and the system of oxidation numbers, and popularised terminology such as “anode”, “cathode”, “electrode” and “ion”. He was a devout Christian; his Sandemanian denomination was an offshoot of the Church of Scotland.