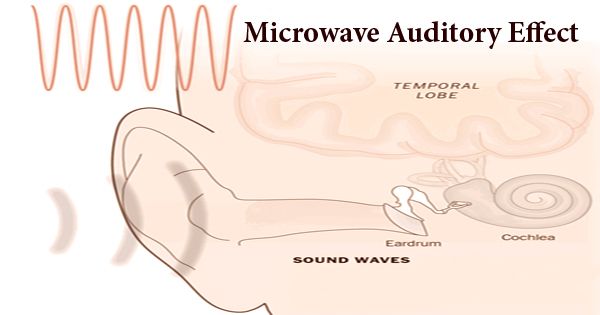 Also known as the microwave hearing effect or the Frey effect, the microwave auditory effect consists of audible clicks caused by pulsed/modulated microwave frequencies that are produced directly within the human head without the need for any electronic device receiving them. The impact was first recorded during World War II by individuals operating in the vicinity of radar transponders. The American neuroscientist Allan H. Frey researched this phenomenon during the Cold War period and was the first to publish details on the existence of the microwave auditory effect (Journal of Applied Physiology, Vol. 17, pages 689-692, 1962); this effect is also often referred to as the Frey effect. The cause is thought to be a thermoelastic expansion of parts of the auditory apparatus, although the findings of holographic interferometry experiments are explained differently by conflicting theories. Later, with shorter-wavelength portions of the electromagnetic spectrum, the microwave auditory effect was found to be inducible.

NASA experiments in the 1970s found that this effect exists, even at low power levels, as a result of the thermal expansion of parts of the human ear around the cochlea. Later, it was discovered that signal modulation produced sounds or words that seemed to originate intracranially. It has been researched for its potential use in communication, but due to the possible hazardous biological effects of microwave radiation, it has not been produced. Similar study carried out in the USSR has explored the use of non-lethal weapons. Allan H. Frey’s “Human auditory system response to modulated electromagnetic energy” appeared in the Journal of Applied Physiology in 1961. The subjects were found to be able to hear sufficiently pulsed microwave radiation in his experiments, from a distance of a few inches to hundreds of feet from the transmitter.

The energy of the absorbed microwaves causes the brain tissue to heat up and expand very slightly, allowing the hearing system in the inner ear to catch a pressure wave. Professor Lin is far from being able to hear voices. But it may be possible to send coded signals this way to an agent. A repetition rate of 50 Hz was used in Frey’s experiments, with a pulse width of between 10-70 microseconds. The perceived loudness, instead of the average power density, was found to be related to the peak power density. The maximum power density for vision was below 80 mW/cm2 at 1.245 GHz. According to Frey, the induced sounds were described as “a buzz, clicking, hiss, or knocking, depending on several transmitter parameters, i.e., pulse width and pulse repetition rate.”

For decades, at the scene of the Tunguska incident on June 30, 1908, humans have recorded hearing mysterious noises in combination with meteors, like ‘thunder-like sounds.’ After a widely-observed meteor burned up in the sky over England, Astronomer Edmund Halley gathered many such accounts. Frey was able to cause the ‘experience of extreme buffeting of the brain, without such obvious vestibular symptoms as dizziness or nausea,’ by adjusting transmitter parameters. A pins and needles sensation was caused by other transmitter parameters. Frey worked with nerve-deaf subjects, speculating that the human detection system was in the cochlea, but due to factors such as tinnitus, the findings were inconclusive at the time of the experiment.

Three possible mechanisms for the effect were proposed by Professor James Lin (Dept of Electr. Engineering, the University of Illinois at Chicago), who is considered a world expert on the microwave auditory effect:

He concluded that the thermoelastic pressures would be one to three orders of magnitude greater than the other candidate mechanisms, based on his theoretical studies (Lin, 1976a,b). Some staff at modern microwave transmission sites that emit pulsed microwave radiation have recorded auditory sensations of clicking or buzzing. The auditory responses to the transmitted frequencies were recorded from approximately 200 MHz to at least 3 GHz. Thermoelastic expansion of parts of the auditory apparatus is assumed to be the cause, and the commonly accepted mechanism is rapid heating of the brain by each pulse (but minuscule, in the range of 10-5 °C) and the resulting pressure wave passing through the skull to the cochlea.

Scientific evidence commonly exists that waves at various electromagnetic frequency levels have physiological effects, including auditory effects, on people exposed to them.

The microwave auditory effect mechanism consists of the absorption of microwave energy and the subsequent small but rapid increase in temperature that causes tissue expansion and creates a thermoelastic/pressure wave that propagates with subsequent activation of the auditory nerve to the cochlea of the inner ear. In 1975, an article by neuropsychologist Don Justesen discussing radiation effects on human perception referred to an experiment by Joseph C. Sharp and Mark Grove at the Walter Reed Army Institute of Research during which Sharp and Grove reportedly were able to recognize nine out of ten words transmitted by “voice modulated microwaves”. Since the radiation levels exceeded the (then-current) 10 mW/cm2 safe exposure limit, critics have noted that there would be brain damage from high-power microwave radiation thermal effects under such conditions, and there was “no conclusive evidence for MAE at lower energy densities”.

Various people experiencing hear-able pipedreams, preposterous problems, or other psychological maladjustments have guaranteed that administration specialists use types of brain control advances dependent on microwave signs to send sounds and contemplations into their heads as a type of electronic provocation, referring to the alleged technology as “voice to skull” or “V2K”. Since a 9 KHz mechanical wave is a wave of 9000 cycles per second, the length of one cycle of this wave is 1/9000 or 110 μs. It is found that if the pulse length corresponds to half of the frequency/period of the acoustic resonance, i.e., approximately 50 μs, then constructive interference occurs as the arriving energy is integrated and thermoelastic waves are more effectively excited. If it is longer, so there is process cancellation.