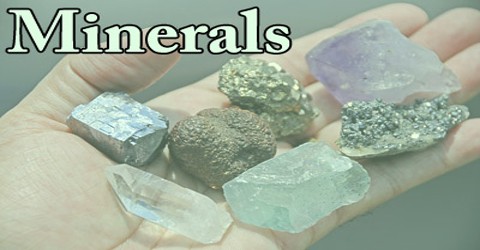 Minerals are defined as solid, inorganic, naturally occurring substances with a definite chemical formula and general structure. Almost all chemical elements in the Earth’s crust are associated with at least one mineral. A mineral: Some minerals are radioactive (uranophane), while others are magnetic (magnetite). Some are uncombined elements, such as gold, silver, sulfur, bismuth, copper and platinum. Certain minerals, such as fluorite (calcium fluoride), glow with a vibrant luminescence after exposure to ultraviolet light.

In order for something to be a mineral, it must first meet four criteria: Minerals are classified by key chemical constituents; the two dominant systems are the Dana classification and the Strunz classification. The silicate class of minerals is subdivided into six subclasses by the degree of polymerization in the chemical structure. All silicate minerals have a base unit of a (SiO4)4− silica tetrahedron—that is, a silicon cation coordinated by four oxygen anions, which gives the shape of a tetrahedron. These tetrahedra can be polymerized to give the subclasses: orthosilicates, disilicates, cyclosilicates, inosilicates, phyllosilicates, and tectosilicates. Other important mineral groups include the native elements, sulfides, oxides, halides, carbonates, sulfates, and phosphates. Minerals are classified by their chemical composition and crystalline structure. These two features occur on a microscopic level, but we can see them in other ways because they determine a mineral’s observable physical properties. In other words, what appears to us on the outside is determined by what’s on the inside.

The seven physical properties of minerals are: Minerals, being natural chemicals, are classified according to their chemistry and crystal form.

A basic classification for minerals is: