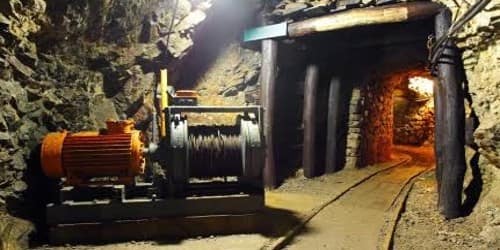 Mining is the process of digging things out of the ground. It is the act, process, or industry of extracting ores, coal, etc. Any material that cannot be grown must be mined. Mining things from the ground is called extraction. Mining can include extraction of metals and minerals, like coal, diamond, gold, silver, platinum, copper, tin and iron. It is the activity or process of searching through large amounts of information for specific data or patterns.

Mining can also include other things like oil and natural gas. It is defined as extracting metals and minerals from the Earth, or the process of placing explosives where they will explode. Some mining is done by scraping away the soil (dirt) from the top of the ground. This is called surface mining. It is economically important to producing regions and countries. Some mining is done by going deep underground into a mine shaft. This is called underground mining. Some mining, such as gold mining, is done in other ways. Gold can be mined by searching in the bed of a river or other stream of water to remove the flakes of gold. This is called panning or placer mining. There are four main mining methods: underground, open surface (pit), placer, and in-situ mining.

A worker in a mine is called a miner. Underground mining is a dangerous job. It is the activity, occupation, and industry concerned with the extraction of minerals. Many mines have accidents. Hundreds of miners die every year from accidents, mostly in poor countries. Each mining method also has varying degrees of impact on the surrounding landscape and environment. Safety rules and special safety equipment is used to try and protect miners from accidents. Underground coal mining is especially dangerous because coal can give off poisonous and explosive gases.

Some towns are mining towns. People live there because they can make money as miners or by doing things for miners. When mining stops the town may become a ghost town.