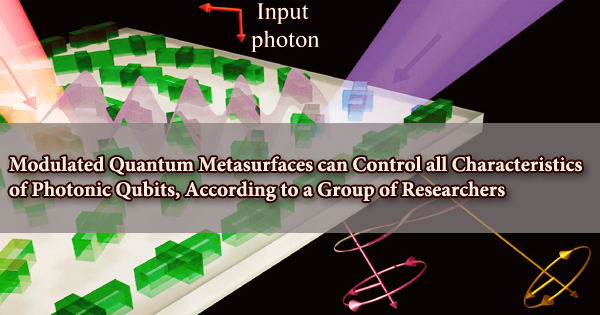 Modulated Quantum Metasurfaces can Control all Characteristics of Photonic Qubits, According to a Group of Researchers

Modulated quantum metasurfaces, according to a team of scientists at Los Alamos National Laboratory, can control all characteristics of photonic qubits, a development that might have implications in quantum information, communications, sensing, and imaging, as well as energy and momentum harvesting. The findings of their research were published in the American Physical Society’s journal Physical Review Letters yesterday.

“People have studied classical metasurfaces for a long time,” says Diego Dalvit, who works in the Condensed Matter and Complex Systems group at the Laboratory’s Theoretical Division. “However, we came up with a novel idea: modulating the optical characteristics of a quantum metasurface in time and space, allowing us to modify all degrees of freedom of a single photon, the most fundamental unit of light, on-demand.”

Cycling processes are essential in many fields of physics, from lasers to topological insulators, and they often provide unexpected insights into the system’s dynamical and structural features. The quantum-mechanical transition amplitudes to that state can interfere destructively when two light fields resonantly drive transitions from two distinct atomic ground states to a shared excited state, producing a three-level lambda-type system.

Metasurfaces are ultrathin structures that have the ability to control light in ways not found in nature. The researchers created a metasurface that resembled an array of rotating crosses, which they may control with lasers or electrical pulses in this example.

They then proposed shooting a single photon through the metasurface, where it splits into a superposition of many colors, paths, and spinning states that are all intertwined, resulting in quantum entanglement, which means the single photon can inherit all of these different properties at the same time.

The ability to create, manipulate, interact, and measure quantum states of light has potential to offer unprecedented improvements in sensing, metrology, imaging, and spectroscopy, among other areas.

“When the metasurface is modulated with laser or electrical pulses, one can control the frequency of the refracted single photon, alter its angle of trajectory, the direction of its electric field, as well as its twist,” says Abul Azad from the Center for Integrated Nanotechnologies at the Laboratory’s Materials Physics and Applications Division.

This technique might be used to encode information in photons flowing inside a quantum network, including banks, quantum computers, and communication between Earth and satellites, by altering these characteristics. Because “eavesdroppers” are unable to observe a photon without modifying its fundamental physics, which if done would warn the transmitter and receiver that the information has been stolen, encoding photons is particularly useful in the realm of cryptography.

The researchers are also experimenting with manipulating the quantum metasurface to draw photons from a vacuum.

“The quantum vacuum is not empty but full of fleeting virtual photons. With the modulated quantum metasurface one is able to efficiently extract and convert virtual photons into real photon pairs,” says Wilton Kort-Kamp, who works in the Theoretical Division at the Lab’s Condensed Matter and Complex Systems group.

Using photons that are already present in the vacuum and shooting them in one direction should result in propulsion in the opposing direction. In the same way, agitating the vacuum should cause the twisted photons to rotate. Structured quantum light might be utilized to produce mechanical push in the future, with just a small amount of energy required to drive the metasurface.