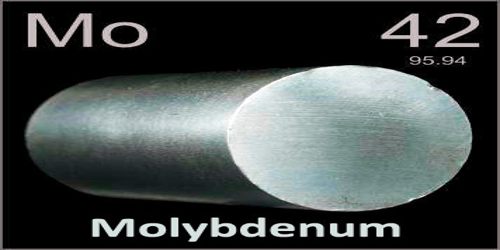 Molybdenum (symbol Mo) A hard, silvery-white metallic element that resists corrosion and retains its strength at high temperatures. The name is from Neo-Latin molybdaenum, from Ancient Greek Μόλυβδος molybdos, meaning lead, since its ores were confused with lead ores. Molybdenum is an essential trace element in plant metabolism. Atomic number 42; atomic weight 95.94; melting point 2,617°C; boiling point 4,612°C; specific gravity 10.22 (at 20°C); valence 2, 3, 4, 5, 6. It is used to harden and toughen steel and to make high-temperature wiring. The soft black mineral molybdenite (molybdenum sulfide, MoS2), looks very like graphite and was assumed to be a lead ore until 1778 when Carl Scheele analysed it and showed it was neither lead nor graphite, although he didn’t identify it.

Others speculated that it contained a new element but it proved difficult to reduce it to a metal. It could be converted to an oxide which, when added to water, formed an acid we now know as molybdic acid, H2MoO4, but the metal itself remained elusive.

Occurrences, Production and Properties of Molybdenum

The main molybdenum ore is molybdenite (molybdenum disulfide). It is processed by roasting to form molybdenum oxide, and then reducing to the metal. The comparative rarity of molybdenum in the Earth’s crust is offset by its concentration in a number of water-insoluble ores, often combined with sulfur in the same way as copper, with which it is often found. Though molybdenum is found in such minerals as wulfenite (PbMoO4) and powellite (CaMoO4), the main commercial source is molybdenite (MoS2). Molybdenum is mined as a principal ore and is also recovered as a byproduct of copper and tungsten mining. The main mining areas are in the USA, China, Chile and Peru. Some molybdenum is obtained as a by-product of tungsten and copper production. World production is around 200,000 tonnes per year. In molybdenite processing, the ore is first roasted in air at a temperature of 700 °C (1,292 °F).

Its elements can be classified based on their physical states (States of Matter) e.g. gas, solid or liquid. This element is a solid. Molybdenum is classified as a “Transition Metal” which are located in Groups 3 – 12 of the Periodic Table. Elements classified as Transition Metals are generally described as ductile, malleable, and able to conduct electricity and heat.

There are 35 known isotopes of molybdenum, ranging in atomic mass from 83 to 117, as well as four metastable nuclear isomers. Seven isotopes occur naturally, with atomic masses of 92, 94, 95, 96, 97, 98, and 100. Of these naturally occurring isotopes, only molybdenum-100 is unstable. In its pure form, molybdenum is a silvery-grey metal with a Mohs hardness of 5.5. It has a melting point of 2,623 °C (4,753 °F); of the naturally occurring elements, only tantalum, osmium, rhenium, tungsten, and carbon have higher melting points. Molybdenum is a transition metal with an electronegativity of 2.16 on the Pauling scale and a standard atomic weight of 95.95 g/mol. It does not visibly react with oxygen or water at room temperature, and the bulk oxidation occurs at temperatures above 600 °C, resulting in molybdenum trioxide: 2 Mo + 3 O2 → 2 MoO3

Molybdenum has a very high melting point so it is produced and sold as a grey powder. Many molybdenum items are formed by compressing the powder at a very high pressure. Most molybdenum is used to make alloys. It is used in steel alloys to increase strength, hardness, electrical conductivity and resistance to corrosion and wear. These ‘moly steel’ alloys are used in parts of engines. Other alloys are used in heating elements, drills and saw blades.

Molybdenum disulfide is used as a lubricant additive. Other uses for molybdenum include catalysts for the petroleum industry, inks for circuit boards, pigments and electrodes.