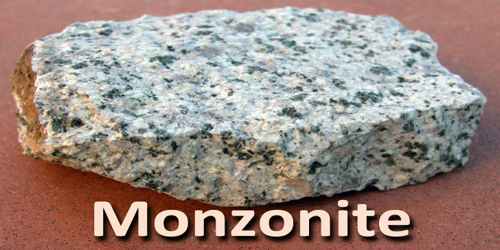 Monzonite is an igneous rock composed chiefly of plagioclase and orthoclase, with small amounts of amphibole, pyroxene, and biotite. Monzonite contains little or no quartz. The rocks are of granitic appearance, usually rather dark grey in colour and fine to moderately coarse grained. It is composed of approximately equal amounts of plagioclase and alkali feldspar, with less than 5% quartz by weight. Quartz, nepheline, and olivine, which are occasionally present, produce quartz, nepheline, and olivene monzonites. It is a relatively uncommon rock type. It usually does not form its own plutons. Monzonitic magma most likely forms only a part of a generally more acidic (granitic) intrusion. Although monzonite itself is not a particularly well-known or widespread rock type, but it has given part of its name (monzo-) as a prefix to several other varieties of plutonic rocks (monzogranite, monzogabbro, foid monzosyenite, etc.).

With an increase in calcic plagioclase and mafic minerals the rock type becomes a diorite. The volcanic equivalent is the latite.

Occurrences and Properties of Monzonite

In the type region of Monzoni, Italy, in the Italian Tirol, these minerals rarely occur as major constituents; moreover, in Monzoni the plagioclase is often calcium-rich (labradorite) and commonly shows prominent zoning. Rocks similar to those of the type area have been described from Norway (akerite), Montana (yogoite, shonkinite), and Sakhalin Island off the Pacific coast of Russia, and other localities throughout the world. Monzonite is not a rare rock type, but it generally occurs in rather small, heterogeneous masses associated with (and perhaps gradational to) diorites, pyroxenites, or gabbros. Most important minerals in monzonitic rocks are definitely feldspars. Small amounts of quartz and feldspathoids may occur. Most important mafic minerals are biotite, augite, and hornblende. Sphene (titanite) and apatite are common accessory minerals. Feldspar is often perthitic (plagiopclase in alkali feldspar) or antiperthitic (alkali feldspar in plagioclase), which makes it harder to visually estimate whether the rock sample is monzonite or not. It may not be very widespread rock type, but the usage of the term “monzonite” is scarcer still. Many “syenite” and “granite” samples are actually monzonites. It may be partly due to the different traditions in Europe and North America which can create confusion. Quartz monzon. In America may be granite (monzogranite) or adamellite in Europe. “Adamellite” itself is unfortunately also ambiguous term.