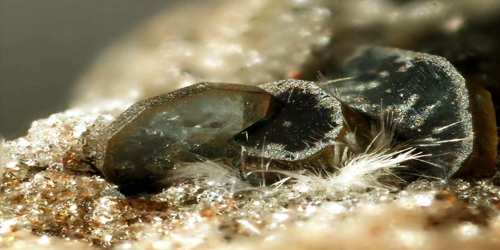 Mullite is a colourless mineral consisting of aluminium silicate in orthorhombic crystalline form: used as a refractory. It can form two stoichiometric forms 3Al2O32SiO2 or 2Al2O3 SiO2. Unusually, mullite has no charge balancing cations present. As a result, there are three different aluminium sites: two distorted tetrahedral and one octahedral. Its formula: Al6Si2O13. It is also one of the important constituents of porcelain.  Clays with < 60% Al2O3 convert to mullite.  The amount of mullite produced is directly related to the amount of Al2O3 and the calcining temperature.

Properties and Applications of Mullite Mechanical properties can be improved further by producing composites.  Additions of Zr2O and SiC have produced fracture toughness at room temperature close to 7 MPam-1/2.

Named for the isle of Mull, Scotland, where it was first (and actually, only ever) found, mullite is a crystalline aluminum silicate in the molecular ratio of 3Al2O3 + 2SiO2. It is most commonly formed by calcining kyanite or other similar natural materials (andalusite, silimanite, etc.) which have a similar composition (1:1 Al2O3 + SiO2), of course leaving some free quartz since the mullite has somewhat concentrated alumina.

Mulite is produced during various melting and firing processes, and is used as a refractory material, due to its high melting point of 1840°C. The main use of high-mullite based products is in hot blast stove checker bricks.  Many refractories in use in the steel industry have varying amounts of mullite based aggregates in them.  Steel ladles, lances, reheat furnaces and slide gates are examples of mullite aggregate based products with various alumina contents.  The use of monolithic and precast shapes is increasing with the use of bricks declining.