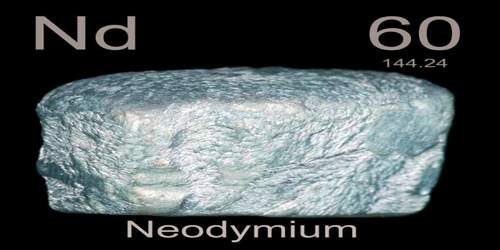 Neodymium is a shiny, silvery metallic element of the lanthanide series. It is present in significant quantities in the ore minerals monazite and bastnäsite. Its atomic number 60; atomic weight 144.24; melting point 1,024°C; boiling point 3,027°C; specific gravity 6.80 or 7.004 (depending on allotropic form); valence 3. Neodymium is not found naturally in metallic form or unmixed with other lanthanides, and it is usually refined for general use. It is used to make glass for welders’ goggles and purple glass for lasers. Neodymium is also used with various other substrate crystals, such as yttrium aluminum garnet in the Nd:YAG laser. This laser usually emits infrared at a wavelength of about 1064 nanometers. The Nd:YAG laser is one of the most commonly used solid-state lasers.

Neodymium was discovered in Vienna in 1885 by Austrian chemist Karl Auer. In 1885, Auer obtained neodymium and praseodymium from didymium, their existence revealed by atomic spectroscopy. Didymium had been studied by Bohuslav Brauner at Prague in 1882 and was shown to vary according to the mineral from which it came. At the time he made his discovery, Auer was a research student of the great German chemist, Robert Bunsen who was the world expert on didymium, but he accepted Auer’s discovery immediately, whereas other chemists were to remain sceptical for several years.

Occurrences, Production and Properties of Neodymium

Neodymium is one of the most abundant of the rare earth elements. Its abundance in the Earth’s crust is thought to be about 12 to 24 parts per million. That places it about 27th among the chemical elements. It is slightly less abundant than copper and zinc. The most common ores of neodymium are monazite and bastnasite. These ores are the most common source for all the rare earth elements. It is typically 10–18% of the rare-earth content of commercial deposits of the light rare-earth-element minerals bastnäsite and monazite. With neodymium compounds being the most strongly colored for the trivalent lanthanides, that percentage of neodymium can occasionally dominate the coloration of rare-earth minerals, when competing chromophores are absent. It usually gives a pink coloration. Outstanding examples of this include monazite crystals from the tin deposits in Llallagua, Bolivia; ancylite from Mont Saint-Hilaire, Quebec, Canada; or lanthanite from the Saucon Valley, Pennsylvania, United States.

The world’s production of neodymium was about 7,000 tonnes in 2004. The bulk of current production is from China, whose government has recently imposed strategic materials controls on the element, raising some concerns in consuming countries and causing skyrocketing prices of neodymium and other rare-earth metals. As of late 2011, 99% pure neodymium was traded in world markets for US$300 to US$350 per kilogram, down from the mid-2011 peak of US$500/kg. The price of neodymium oxide fell from $200/kg in 2011 to $40 in 2015, largely due to illegal production in China which circumvented government restrictions. Neodymium is a soft, malleable metal. Malleable means capable of being hammered into thin sheets. It can be cut and shaped fairly easily. It has a melting point of 1,024°C (1,875°F) and a boiling point of about 3,030°C (5,490°F). Neodymium has a density of 7.0 grams per cubic centimeter.

Neodymium metal tarnishes slowly in air and it burns readily at about 150 °C to form neodymium(III) oxide:

The most important use for neodymium is in an alloy with iron and boron to make very strong permanent magnets. This discovery, in 1983, made it possible to miniaturise many electronic devices, including mobile phones, microphones, loudspeakers and electronic musical instruments. These magnets are also used in car windscreen wipers and wind turbines. Neodymium is a component, along with praseodymium, of didymium glass. This is a special glass for goggles used during glass blowing and welding. The element colours glass delicate shades of violet, wine-red and grey. Neodymium is also used in the glass for tanning booths, since it transmits the tanning UV rays but not the heating infrared rays.

Neodymium glass is used to make lasers. These are used as laser pointers, as well as in eye surgery, cosmetic surgery and for the treatment of skin cancers.