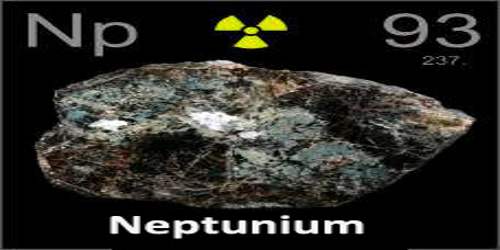 Neptunium is a silvery, radioactive metallic element of the actinide series. It occurs naturally in minute amounts in uranium ores and is produced artificially as a byproduct of plutonium production. Its longest-lived isotope is Np 237 with a half-life of 2.1 million years. Its atomic number 93. A neptunium atom has 93 protons and 93 electrons, of which seven are valence electrons. Neptunium metal is silvery and tarnishes when exposed to air. The element occurs in three allotropic forms and it normally exhibits five oxidation states, ranging from +3 to +7. It is radioactive, poisonous, pyrophoric, and can accumulate in bones, which makes the handling of neptunium dangerous. Though traces of neptunium have subsequently been found in nature, where it is not primeval but produced by neutron-induced transmutation reactions in uranium ores, American physicist Edwin M. McMillan and chemist Philip H. Abelson first found neptunium in 1940 after uranium had been bombarded by neutrons from the cyclotron at Berkeley, California. The element was named after the planet Neptune, which is the first planet beyond Uranus.

In early 1934, Enrico Fermi in Italy tried to produce elements 93 and 94 by bombarding uranium with neutrons, and claimed success. Ida Tacke-Noddack questioned Fermi’s claim, pointing out he had failed to do a complete analysis, and all that he had found were fission products of uranium. In 1938, Horia Hulubei and Yvette Cauchois claimed to have discovered element 93, but the claim was also criticised on the grounds that element 93 did not occur naturally.

Occurrences, production and Properties of Neptunium

Neptunium was considered to be entirely artificial when it was first discovered. Later, it was estimated that very small quantities of neptunium are present in the Earth’s crust. It can also be found in uranium ores. After only about 80 million years, the concentration of even the longest lived isotope, 237Np, would have been reduced to less than one-trillionth (10−12) of its original amount; and even if the whole Earth had initially been made of pure 237Np (and ignoring that this would be well over its critical mass of 60 kg), 2100 half-lives would have passed since the formation of the Solar System, and thus all of it would have decayed. Thus neptunium is present in nature only in negligible amounts produced as intermediate decay products of other isotopes. Once in the environment, neptunium generally oxidizes fairly quickly, usually to the +4 or +5 state. Regardless of its oxidation state, the element exhibits a much greater mobility than the other actinides, largely due to its ability to readily form aqueous solutions with various other elements.

Neptunium has been produced in weighable amounts in nuclear reactors. In breeder reactors it is a by-product of plutonium production from uranium-238 (about one part neptunium is produced for every 1,000 parts plutonium). All neptunium isotopes are radioactive; the stablest is neptunium-237, with a half-life of 2,144,000 years, and among the most unstable is neptunium-225, with a half-life of more than 2 microseconds. Neptunium-237 can be separated from used reactor fuel to study the physical and chemical properties of the element. It is a silvery metal, exists in three crystalline modifications; the room-temperature form (alpha) is orthorhombic. Neptunium is chemically reactive and is more similar to plutonium than to uranium, with oxidation states from +3 to +7. Neptunium ions in aqueous solution possess characteristic colours: Np3+, pale purple; Np4+, pale yellow-green; NpO2+, green-blue; NpO22+, varying from colourless to pink or yellow-green, depending on the anion present; and Np7+, dark green. Compounds of neptunium have been prepared in all oxidation states +3 to +7; they are generally similar to compounds of uranium and plutonium with the same oxidation state. Neptunium is little used outside research. The isotope neptunium-237 has been used in neutron detectors. The symbol used is a representation of the trident belonging to the Roman god Neptune. Neptunium is fissionable, and could theoretically be used as fuel in a fast neutron reactor or a nuclear weapon, with a critical mass of around 60 kilograms. In 1992, the U.S. Department of Energy declassified the statement that neptunium-237 “can be used for a nuclear explosive device”. It is not believed that an actual weapon has ever been constructed using neptunium. As of 2009, the world production of neptunium-237 by commercial power reactors was over 1000 critical masses a year, but to extract the isotope from irradiated fuel elements would be a major industrial undertaking.

Neptunium is obtained as a by-product from nuclear reactors. It is extracted from the spent uranium fuel rods. Trace quantities occur naturally in uranium ores.