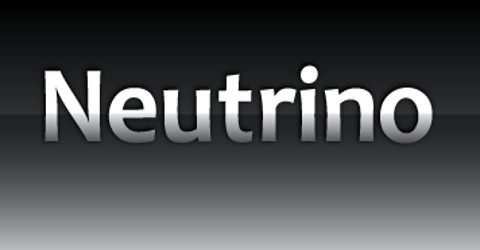 Neutrino is a subatomic particle that is very similar to an electron, but has no electrical charge and a very small mass, which might even be zero. Neutrinos are known for their ability to propagate over considerable distances through solid matter almost unaffected. Neutrinos were originally thought to have no mass. Today they are believed to have mass, but it is exceedingly small, only a tiny fraction of the mass of a proton.

Neutrinos are emitted in huge numbers by stars, including the sun. They are important to astronomers and cosmologists, because their behavior provides clues to the evolution of stars and galaxies. Neutrinos may give insights into how the universe was formed, how large it is, and what will ultimately happen to it. Neutrinos are difficult to detect, because they do not readily interact with other forms of matter. But using special equipment located in deep underground laboratories where no other cosmic particles can penetrate, scientists have detected neutrinos and discovered some of their properties.

There are three ‘flavors’ of neutrinos: electron, muon and tau. Most people are familiar with three particles of matter: electron, neutron and proton. There are many more parts than just those three, however. Protons and neutrons fall into a category of particles called fermionic hadrons, or baryons. Fermions in general are the building blocks of matter. Baryons are made up of quarks, and there are six (6) types of quarks resulting in about one-hundred twenty 120 baryons.

Neutrinos fall into a category called leptons. Leptons are also fermions, and together with quarks make up matter. The difference between leptons and quarks, is that leptons exist on their own, where quarks combine to form baryons. There are 6 types of leptons: electron, electron neutrino, muon, muon neutrino, tau and tau neutrino. Neutrinos cannot be detected directly, because they do not ionize the materials they are passing through  A unique reaction to identify antineutrinos, sometimes referred to as inverse beta decay, as applied by Reines and Cowan, requires a very large detector to detect a significant number of neutrinos. All detection methods require the neutrinos to carry aminimum threshold energy. So far, there is no detection method for low-energy neutrinos, in the sense that potential neutrino interactions cannot be uniquely distinguished from other causes. Neutrino detectors are often built underground to isolate the detector from cosmic rays and other background radiation.

Neutrinos are passing through your body in vast numbers at all times. They are flooding out of the sun, from its central furnace, and even if it is nighttime where we are, those neutrinos are passing right through the earth and through our body as though the earth wasn’t even there. Cosmic rays (high energy particles flying in from deep space) often strike atoms in the high atmosphere and produce a number of neutrinos.

Various detection methods have been used in neutrions. Super Kamiokande is a large volume of water surrounded by photomultiplier tubes that watch for the Cherenkov radiation emitted when an incoming neutrino creates an electron or muon in the water. The Sudbury Neutrino Observatory is similar, but uses heavy water as the detecting medium, which uses the same effects, but also allows the additional reaction any-flavor neutrino photo-dissociation of deuterium, resulting in a free neutron which is then detected from gamma radiation after chlorine-capture. Other detectors have consisted of large volumes of chlorine or gallium which are periodically checked for excesses of argon or germanium, respectively, which are created by electron-neutrinos interacting with the original substance. Using neutrinos, it would be possible to communicate between any two points on Earth without using satellites or cables. Neutrino communication systems would be much more complicated than today’s systems, but may have important strategic uses. The most intriguing thing about using neutrinos to communicate is that they can penetrate almost anything they encounter. This could be a particularly useful feature for submarines, for example, or for sending messages in space, allowing them to travel straight through a planet.

Because of their neutral electric charge and almost non-existent mass, neutrinos aren’t affected by magnetism or gravity, so can travel almost unimpeded. The experiment was carried out at Fermilab, using its particle accelerator and a multi-ton detector called MINERvA, located in a cavern 100 meters underground.