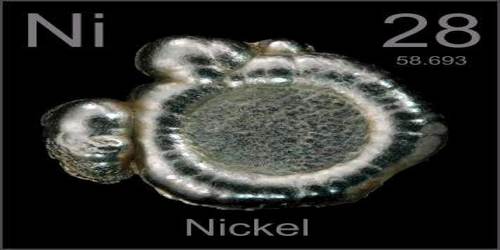 Nickel is a silvery, hard, ductile metallic element that occurs in ores along with iron or magnesium. It occurs sparingly in nature in minerals such as pentlandite and niccolite. It is present in most meteorites. It resists oxidation and corrosion and is used to make alloys such as stainless steel. It is also used as a coating for other metals. Its atomic number 28; atomic weight 58.69; melting point 1,453°C; boiling point 2,732°C; specific gravity 8.902; valence 0, 1, 2, 3. The name Nickel derives from an abbreviation of the German word ‘kupfernickel’ meaning “Devil’s copper”. In German ‘Kupfer’ means copper and ‘Nickel’ means devil. The German word ‘Nickel’ was a form of the name Nicholas, a term commonly associated with the devil which is why “Old Nick” is a familiar name for Satan. The metal was originally named by German miners who believed that the devil had changed or contaminated this strange ore, turning it into a less valuable and harder to work metal than valuable copper. The name was given by the chemist Axel von Cronstedt (1722-1765) who discovered the element.

Pure nickel was first extracted by Baron Axel Fredrik Cronstedt in 1751, but it was known to exist much earlier. Chinese documents from around 1500BC make reference to ‘white copper’ (baitong), which was very likely an alloy of nickel and silver. Pure native nickel is found in Earth’s crust only in tiny amounts, usually in ultramafic rocks, and in the interiors of larger nickel–iron meteorites that were not exposed to oxygen when outside Earth’s atmosphere. Meteoric nickel is found in combination with iron, a reflection of the origin of those elements as major end products of supernova nucleosynthesis. An iron–nickel mixture is thought to compose Earth’s inner core.

Production and Properties of Nickel The origins of nickel are, quite literally, stellar. Nickel forms during the nuclear fusion processes in the heart of massive stars where the incredible temperatures and pressures cause the nuclei of lighter elements to fuse together. When massive stars become unstable at the end of their life cycles, the resulting massive explosion, also known as a supernova, scatters the nickel atoms into the large clouds of gas and dust, or nebula.

Nickel is classified as a “Transition Metal” which is located in Groups 3 – 12 of the Periodic Table. Elements classified as Transition Metals are generally described as ductile, malleable, and able to conduct electricity and heat. For additional facts and information refer to Nickel Properties. The melting point of nickel is 1453°C, boiling point is 2732°C, specific gravity is 8.902 (25°C), with a valence of 0, 1, 2, or 3. Nickel is a silvery white metal that takes a high polish. Nickel is hard, ductile, malleable, and ferromagnetic. It is a fair conductor of heat and electricity. Nickel is a member of the iron-cobalt group of metals. Exposure to nickel metal and soluble compounds should not exceed 1 mg/M3 (8 hour time weighted average for a 40 hour week). Some nickel compounds (nickel carbonyl, nickel sulfide) are considered to be highly toxic or carcinogenic. Nickel is one of the most widely used metals on the planet. According to the Nickel Institute, the metal is used in over 300,000 different products. Most often it is found in steels and metal alloys, but it is also used in the production of batteries and permanent magnets. It is mainly used in making alloys such as stainless steel. Nichrome is an alloy of nickel and chromium with small amounts of silicon, manganese and iron. It resists corrosion, even when red hot, so is used in toasters and electric ovens. A copper-nickel alloy is commonly used in desalination plants, which convert seawater into fresh water. Nickel steel is used for armour plating. Other alloys of nickel are used in boat propeller shafts and turbine blades.