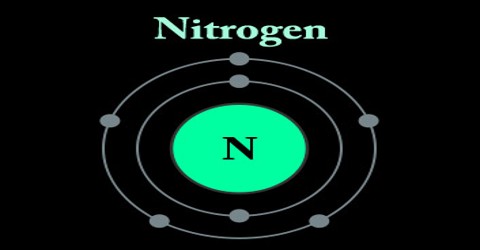 Nitrogen is a gas. It is a non-metallic element found in group 15 on the periodic table. It has an atomic number of 7, meaning it has 7 protons, and it has an atomic mass of 14.007 amu (atomic mass units). It is found in amino acids that make up proteins, in nucleic acids, that comprise the hereditary material and life’s blueprint for all cells, and in many other organic and inorganic compounds. In addition, nitrogen comprises about 80% of the Earth’s atmosphere. There are actually about 4,000 trillion tons of nitrogen gas in Earth’s atmosphere. Nitrogen is an inert element which means that it does not readily react with other elements. However, nitrogen is most useful when it is mixed with other elements.

Nitrogen is an essential element for life, because it is a constituent of DNA and, as such, is part of the genetic code. It is used in a wide variety of important manufactures, including ammonia, nitric acid, TNT, and fertilizers. The Atomic Number of this element is 7 and the Element Symbol is N. Nitrogen is a component of amino acids and urea. Amino acids are the building blocks of all proteins. Proteins comprise not only structural components such as muscle, tissue and organs, but also enzymes and hormones essential for the functioning of all living things. Urea is a byproduct of protein digestion. We use the term “organic nitrogen” to describe a nitrogen compound that had its origin in living material. The nitrogen in protein and urea is organic nitrogen. Organic nitrogen can enter septic systems as bodily wastes, discarded food material, or as components of cleaning agents. Nitrogen is important to the chemical industry. It is used to make fertilisers, nitric acid, nylon, dyes and explosives. To make these products, nitrogen must first be reacted with hydrogen to produce ammonia. This is done by the Haber process. 150 million tonnes of ammonia are produced in this way every year.

Nitrogen gas is also used to provide an unreactive atmosphere. It is used in this way to preserve foods and in the electronics industry during the production of transistors and diodes. Large quantities of nitrogen are used in annealing stainless steel and other steel mill products. Annealing is a heat treatment that makes steel easier to work.

Liquid nitrogen is often used as a refrigerant. It is used for storing sperm, eggs and other cells for medical research and reproductive technology. It is also used to rapidly freeze foods, helping them to maintain moisture, colour, flavour and texture.

Nitrogen makes up 78% of the air, by volume. It is obtained by the distillation of liquid air. Around 45 million tonnes are extracted each year. It is found, as compounds, in all living things and hence also in coal and other fossil fuels.

Nitrogen is cycled naturally by living organisms through the ‘nitrogen cycle’. It is taken up by green plants and algae as nitrates, and used to build up the bases needed to construct DNA, RNA and all amino acids. Amino acids are the building blocks of proteins. In Biological, animals obtain their nitrogen by consuming other living things. They digest the proteins and DNA into their constituent bases and amino acids, reforming them for their own use. Microbes in the soil convert the nitrogen compounds back to nitrates for the plants to re-use. The nitrate supply is also replenished by nitrogen-fixing bacteria that ‘fix’ nitrogen directly from the atmosphere.

Crop yields can be greatly increased by adding chemical fertilisers to the soil, manufactured from ammonia. If used carelessly the fertiliser can leach out of the soil into rivers and lakes, causing algae to grow rapidly. This can block out light preventing photosynthesis. The dissolved oxygen soon gets used up and the river or lake dies. Nitrogen is a naturally occurring element that is essential for growth and reproduction in both plants and animals. Nitrogen (N2) makes up almost 80% of our atmosphere, but it is an unreactive form that is not accessible to us.

Today, humans create over 2 times as much reactive nitrogen as nature. In contrast, human activity contributes just 5-10% of CO2 emissions. Much of this reactive nitrogen has accummulated in the environment, where it causes a series of negative impacts to human and ecossytem health. Major sources of this reactive nitrogen include agriculture and the burning of fossil fuels. This nitrogen pollution causes profound environmental impacts, including smog, acid rain, forest dieback, coastal ‘dead zones’, biodiversity loss, stratospheric ozone depletion and increased greenhouse gases. It also affects human health, including respiratory disease and an increased risk for birth defects.