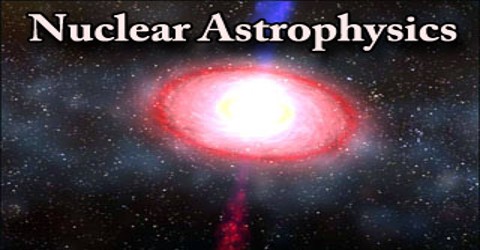 Nuclear Astrophysics is a field at the intersection of nuclear physics and astrophysics that seeks to understand how nuclear processes shape the cosmos. In essence we look for the connection between properties of atomic nuclei and the properties of planets, stars, and galaxies. One fascinating aspect of this field is its interdisciplinarity and diversity. Work in nuclear astrophysics includes astronomical observations using telescopes, gravitational wave detectors, and neutrino detectors; accelerator laboratory experiments using beams of stable nuclei, radioactive nuclei, neutrons, and gamma-rays; laboratory analysis of interstellar grains; large scale computer simulations of stellar explosions and nuclei; and theoretical work in nuclear physics and astrophysics. Nuclear Astrophysics is one of the great scientific challenges is understanding how elements form. This process, called nucleosynthesis, occurs at extreme stellar temperatures and pressures, making it difficult to simulate in the laboratory. The conditions produced by NIF experiments, however, are well matched to the conditions that exist in stars in several phases of their evolution. As a result, NIF is a powerful tool for exploring nuclear physics.

Elements heavier than iron are formed either slowly, during the life of a star, or rapidly, during a star’s last few seconds. NIF can more realistically replicate the hot, dense stellar plasma where both processes occur in nature than is possible in other laboratory experiments. Livermore physicists are currently studying the slow nucleosynthesis process, or s-process. This reaction has a relatively large cross-section, or production probability, at stellar temperatures and densities, so it has been studied to high accuracy in laboratory experiments using low-energy accelerators.

The basic tenets of nuclear astrophysics are that only isotopes of hydrogen and helium and traces of lithium, beryllium, and boron can be formed in a homogeneous big bang model, and all other elements are formed in stars. The conversion of nuclear mass to radiative energy by merit of Einstein’s famous mass-energy relation in relativity is the source of energy which allows stars to shine for up to billions of years. Many notable physicists of the 19th century, such as Mayer, Waterson, von Helmholtz, and Lord Kelvin, postulated that the Sun radiates thermal energy based on converting gravitational potential energy into heat. The theory of stellar nucleosynthesis reproduces the chemical abundances observed in the Solar System and galaxy, which from hydrogen to uranium; show an extremely varied distribution spanning twelve orders of magnitude (one trillion). While impressive, these data were used to formulate the theory, and a scientific theory must be predictive in order to have any merit. The theory of stellar nucleosynthesis has been well-tested by observation and experiment since the theory was first formulated.

The theory predicted the observation of technetium the lightest chemical element with no stable isotopes in stars, observation of galactic gamma-emitters such as 26Al and 44Ti, observation of solar neutrinos, and observation of neutrinos from supernova 1987a. These observations have far-reaching implications. 26Al has a lifetime a bit less than one million years, which is very short on a galactic timescale, proving that nucleosynthesis is an ongoing process even in our own time. Work which led to the discovery of neutrino oscillation, implying a non-zero mass for the neutrino and thus not predicted by the Standard Model of particle physics, was motivated by a solar neutrino flux about three times lower than expected, which was a long-standing concern in the nuclear astrophysics community such that it was colloquially known simply as the Solar neutrino problem. The observable neutrino flux from nuclear reactors is much larger than that of the Sun, and thus Davis and others were primarily motivated to look for solar neutrinos for astronomical reasons.

Key Open Problems in the Field

Current key open questions include the question of the origin of the elements heavier than about germanium, in particular the elements from germanium to palladium who seem to have a much more complex origin than anticipated. Another open question is how we can use neutron stars as laboratories to learn about what happens with ordinary matter when its compressed to very high densities. This ties into observations with X-ray observatories, radio telescopes, and the possible detection of gravitational waves from neutron star systems. Two important reactions occur in the s-process. In neutron capture, the mass of the nucleus increases by one unit, while the charge stays constant. In beta decay, the charge of the nucleus increases of decreases, and the mass remains unchanged. Accelerator experiments have measured the rates for neutron capture and beta decay, called cross sections, for most stable nuclei. Measuring cross sections of unstable short-lived nuclei has been impossible, however, in part because such studies would require unsafe quantities of radioactive material. Another complication is that nuclei in stellar plasma often exist in excited states that modify capture probability.

In addition, the laser energy compresses the target, reducing its area by a factor of 1,000, boosting the density of nuclei, and increasing the probability of a neutron hitting a nucleus. Because of the additional neutrons and the extremely dense target material, an astonishing 2,800 years of stellar neutron capture occurs in every NIF shot. Even for short-lived nuclei, multiple reactions are possible in a single shot, potentially advancing scientific understanding of nucleosynthesis far more rapidly than accelerator-based experiments.