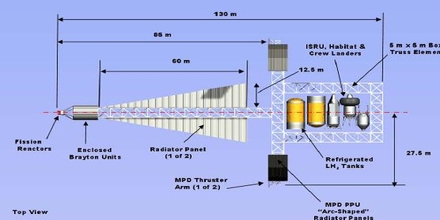 Nuclear Electric Rocket also known as space nuclear fission electric power systems, in a nuclear electric rocket, nuclear thermal energy is changed into electrical energy that is used to power one of the electrical propulsion technologies. Technically the powerplant is nuclear, not the propulsion system, but the terminology is standard. Research in nuclear propulsion began with studies for nuclear thermal propulsion, where the reactor heated a propellant that was allowed to expand through a nozzle.