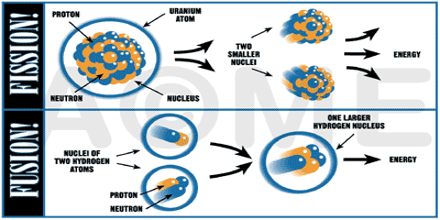 Main purpose of this lecture is to present on Nuclear Reactions: Fission and Fusion. When atoms are bombarded with neutrons, their nuclei splits into 2 parts which are roughly equal in size. Nuclear fission in the process whereby a nucleus, with a high mass number, splits into 2 nuclei which have roughly equal smaller mass numbers. There are 2 types of fission that exist: Spontaneous Fission and Induced Fission. In nuclear fusion, two nuclei with low mass numbers combine to produce a single nucleus with a higher mass number.