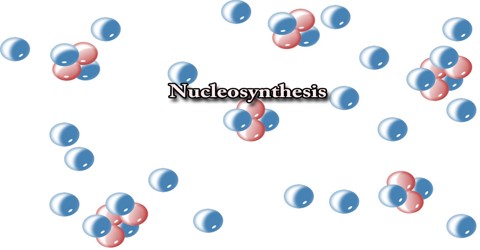 Nucleosynthesis is the process by which heavier chemical elements are synthesized in the interiors of stars from hydrogen nuclei and other previously synthesized elements. Precisely which elements are involved in nucleosynthesis depends on the age and mass of the star. The most prevalent reaction in smaller stars like our Sun is the fusion of hydrogen into helium by the proton-proton chain; in more massive stars this fusion occurs via the carbon cycle. ‘Nucleo-‘ means ‘to do with nuclei’; ‘synthesis’ means ‘to make’, so nucleosynthesis is the creation of (new) atomic nuclei.

In astronomy – and astrophysics and cosmology – there are two main kinds of nucleosynthesis, Big Bang nucleosynthesis (BBN), and stellar nucleosynthesis. It is the process that creates new atomic nuclei from pre-existing nucleons, primarily protons and neutrons. The first nuclei were formed about three minutes after the Big Bang, through the process called Big Bang nucleosynthesis. It was then that hydrogen and helium formed to become the content of the first stars, and this primeval process is responsible for the present hydrogen/helium ratio of the cosmos. In this process, as more and more particles fuse together, such as the atoms of hydrogen and helium in stars, the new product of the fusion can become unstable and eventually split up or break apart. When the chemicals hydrogen and helium mix up, it then becomes the particle or isotope known as Be-17, which has the unstable atomic mass of 8. And it’s lifetime in approximately 17 seconds only due to its unstable nature.

Nucleosynthesis also involves the burning of heavier elements created by earlier fusion; for example, helium may burn via the triple alpha process. More massive stars—over eight solar masses—also fuse carbon into neon and magnesium, oxygen into silicon and sulfur, and silicon into iron. The nucleosynthesis of iron is the precursor to the transition into the supernova phase. Big Bang Nucleosynthesis – Big Bang Nucleosynthesis produced no elements heavier than lithium. By the first millisecond, the universe had cooled to a few trillion kelvins (1012 K) and quarks finally had the opportunity to bind together into free protons and neutrons. Free neutrons are unstable with a half-life of about ten minutes (614.8 s) and formed in much smaller numbers. The abundance ratio was about seven protons for every neutron. Before one neutron half-life passed nearly every neutron had paired up with a proton, and nearly every one of these pairs had paired up to form helium. By this time the universe had cooled to a few billion kelvins (109 K) and the rate of nucleosynthesis had slowed down significantly. By the time the universe was three minutes old the process had basically stopped and the relative abundances of the elements was fixed at ratios that didn’t change for very long time: 75% hydrogen, 25% helium, with trace amounts of deuterium (hydrogen-2), helium-3, and lithium-7. Stellar Nucleosynthesis – Stellar Nucleosynthesis is the process that involves the synthesis of nuclei due to nuclear reactions that take place in stars. These nuclei belong to various elements that are heavier than hydrogen. More particularly, the protons and neutrons of the lighter element nuclei take part in fusion reactions to form nuclei of much heavier elements. The products of stellar nucleosynthesis are generally dispersed into the interstellar gas through mass loss episodes and the stellar winds of low mass stars. The mass loss events can be witnessed today in the planetary nebulae phase of low-mass star evolution, and the explosive ending of stars, called supernovae, of those with more than eight times the mass of the Sun. Explosive Nucleosynthesis – Explosive Nucleosynthesis occurs too rapidly for radioactive decay to decrease the number of neutrons, so that many abundant isotopes with equal and even numbers of protons and neutrons are synthesized by the silicon quasiequilibrium process. During this process, the burning of oxygen and silicon fuses nuclei that themselves have equal numbers of protons and neutrons to produce nuclides which consist of whole numbers of helium nuclei, up to 15 (representing 60Ni). The quasiequilibrium produces radioactive isobars 44Ti, 48Cr, 52Fe, and 56Ni, which (except 44Ti) are created in abundance but decay after the explosion and leave the most stable isotope of the corresponding element at the same atomic weight. The most abundant and extant isotopes of elements produced in this way are 48Ti, 52Cr, and 56Fe. Cosmic Ray Spallation – Cosmic Ray Spallation process reduces the atomic weight of interstellar matter by the impact with cosmic rays, to produce some of the lightest elements present in the universe. Most notably spallation is believed to be responsible for the generation of almost all of 3He and the elements lithium, beryllium, and boron, although some 7Li and 7Be are thought to have been produced in the Big Bang. The spallation process results from the impact of cosmic rays against the interstellar medium. These impacts fragment carbon, nitrogen, and oxygen nuclei present. The process results in the light elements beryllium, boron, and lithium in the cosmos at much greater abundances than they are found within solar atmospheres.

The Goal of the Theory

The goal of the theory of nucleosynthesis is to explain the vastly differing abundances of the chemical elements and their several isotopes from the perspective of natural processes. The primary stimulus to the development of this theory was the shape of a plot of the abundances versus the atomic number of the elements. Those abundances, when plotted on a graph as a function of atomic number, have a jagged sawtooth structure that varies by factors up to ten million.