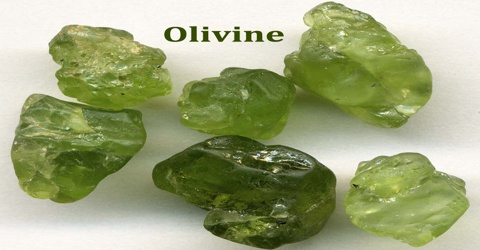 Olivine is a common mineral in the igneous rocks, such as basalt and gabbro that make up most of the Earth’s crust beneath the oceans. Its chemical formula is: (Mg2+, Fe2+)2SiO4. It is a type of nesosilicate or orthosilicate. It is a common mineral in the Earth’s subsurface but weathers quickly on the surface. Only few localities yield large examples of this mineral, although small and microscopic grains are found worldwide. Olivine is also found in meteorites, and large grains have been reported in many of them. The olivines are a class of common silicate minerals named for their greenish or olive color. They are glassy, fracture conchoidally (i.e., along curving cleavage surfaces), and are often found in meteorites and in mafic igneous rocks such as basalt, dunite, gabbro, and peridotite. Compositions of olivine are commonly expressed as molar percentages of forsterite (Fo) and fayalite (Fa) (e.g., Fo70Fa30). Forsterite has an unusually high melting temperature at atmospheric pressure, almost 1,900 °C (3,450 °F), but the melting temperature of fayalite is much lower (about 1,200 °C [2,190 °F]).

Olivine with 10–30% fayalite is defined as chrysolite; 30–50%, hyalosiderite; 50–70%, hortonolite; and 70–90%, ferrohortonite. The remainder in all cases is forsterite. An olivine with less than 10% fayalite is classified simply as forsterite, while one with less than 10% forsterite is classified simply as fayalite. Confusingly, the term chrysolite is also sometimes used as a synonym for olivine in general.

Structure and uses of Olivine

Compression of olivine’s atomic structure to its spinel phases under extreme pressure causes a second seismic discontinuity at approximately 250 mi (400 km) and a third at approximately 420 mi (670 km). These olivine–spinel phase transitions affect the mechanical properties of the whole mantle, which in turn determine the convective flow processes that drive plate tectonics and thus much of the geological history Earth. There are three distinct oxygen sites (marked O1, O2 and O3 in figure 1), two distinct metal sites (M1 and M2) and only one distinct silicon site. O1, O2, M2 and Si all lie on mirror planes, while M1 exists on an inversion center. O3 lies in a general position.

The aluminium foundry industry uses olivine sand to cast objects in aluminium. Olivine sand requires less water than silica sands while still holding the mold together during handling and pouring of the metal. Less water means less gas (steam) to vent from the mold as metal is poured into the mold. The purest form of olivine mineral is dunites and the peridotites hence these names frequently come under the uses of olivine. Olivine is not only found on the earth but it is also commonly found on the moon and other meteorites. Sometimes the content of olivine in a meteorite is about 50 percent.