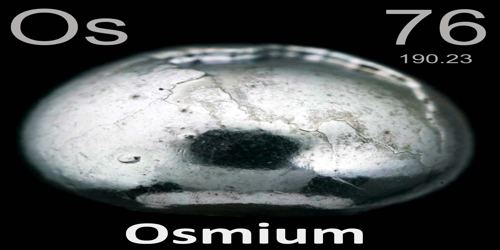 Osmium is a hard, brittle, bluish-white metallic element that is the densest naturally occurring element. It is the densest naturally occurring element, with a density of 22.59 g/cm3. Its atomic number 76; atomic weight 190.2; melting point 3,000°C; boiling point 5,000°C; specific gravity 22.57; valence 2, 3, 4, 8. Osmium’s melting point is over 5,400 degrees Fahrenheit and its boiling point is over 9,000! It has another great quality of resisting corrosion, especially when exposed to air. It is used to make very hard alloys for fountain pen points, electrical contacts, and instrument pivots. In 1803, Smithson Tennant added platinum to dilute aqua regia, which is a mixture of nitric and hydrochloric acids, and observed that not all the metal went into solution. Earlier experimenters had assumed that the residue was graphite, but he suspected it was something else, and he began to investigate it. By a combination of acid and alkali treatments he eventually separated it into two new metal elements, which he named iridium and osmium, naming the latter on account of the strong odour it gave off. Its name is derived from osme the Greek word for smell. Although it was recognised as a new metal, little use was made of it because it was rare and difficult to work with, although it was extremely hard wearing and for several years it was used for pen nibs and gramophone needles.

Osmium can be found in nature as a pure substance or within the mineral osmiridium. However, it has been found within the waste products of nickel refining facilities. It has no known biological role. The metal is not toxic, but its oxide is volatile and very toxic, causing lung, skin and eye damage.

Occurrences, Production and Properties of Osmium

Osmium occurs uncombined in nature and also in the mineral osmiridium (an alloy with iridium). Within Earth’s crust, osmium, like iridium, is found at highest concentrations in three types of geologic structure: igneous deposits, impact craters, and deposits reworked from one of the former structures. The largest known primary reserves are in the Bushveld igneous complex in South Africa, though the large copper–nickel deposits near Norilsk in Russia, and the Sudbury Basin in Canada are also significant sources of osmium. Smaller reserves can be found in the United States. The alluvial deposits used by pre-Columbian people in the Chocó Department, Colombia are still a source for platinum group metals. The second large alluvial deposit was found in the Ural Mountains, Russia, which is still mined. Pure osmium metal does not occur in nature. Osmium has a low crustal abundance of about 0.001 part per million. Though rare, osmium is found in native alloys with other platinum metals: in siserskite (up to 80 percent), in iridosmine, in aurosmiridium (25 percent), and in slight amounts in native platinum. Processes for isolating it are an integral part of the metallurgical art that applies to all platinum metals.

Osmium is, with ruthenium, the most noble of the platinum metals, and cold and hot acids are without effect on them. It can be dissolved by fused alkalies, especially if an oxidizing agent such as sodium chlorate is present. Osmium will react at 200° C with air or oxygen to form OsO4.

Osmium is a transition metal like the other members of the group. They are less reactive than the typical metals but more reactive than the less typical metals. The transition metals are characterized by having the outermost electron shell containing two electrons and the next inner shell an increasing number of electrons. Because of the small energy differences between the valence shells, a number of oxidation states occur. Osmium forms compounds with oxidation states ranging from −2 to +8. The most common oxidation states are +2, +3, +4, and +8. The +8 oxidation state is notable for being the highest attained by any chemical element aside from iridium’s +9 and is encountered only in xenon, ruthenium, hassium, and iridium. The oxidation states −1 and −2 represented by the two reactive compounds Na2[Os4(CO)13] and Na2[Os(CO)4] are used in the synthesis of osmium cluster compounds.

Osmium has only a few uses. It is used to produce very hard alloys for fountain pen tips, instrument pivots, needles and electrical contacts. It is also used in the chemical industry as a catalyst. Osmium wires were used for filaments of early incandescent lamps before the introduction of tungsten. Osmium tetroxide has been used in fingerprint detection and in staining fatty tissue for optical and electron microscopy. Osmium has been used chiefly as a hardener in alloys of the platinum metals, though ruthenium has generally replaced it. The only known clinical use of osmium appears to be for synovectomy in arthritic patients in Scandinavia. It involves the local administration of osmium tetroxide (OsO4), which is a highly toxic compound.

Osmium is usually sold as a minimum 99.9% pure powder. Like other precious metals, it is measured by troy weight and by grams. Its price in 2012 was about $400 per troy ounce (or about $13,000 per kilogram), depending on the quantity and its supplier.