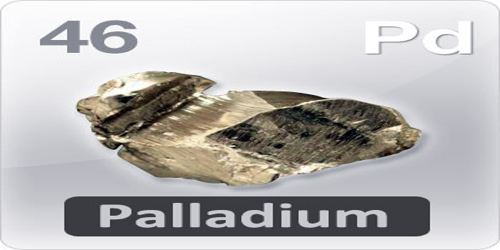 Palladium (Pd) is a malleable, ductile, grayish-white metallic element that occurs naturally with platinum. Palladium, platinum, rhodium, ruthenium, iridium and osmium form a group of elements referred to as the platinum group metals (PGMs). These have similar chemical properties, but palladium has the lowest melting point and is the least dense of them. Its atomic number 46; atomic weight 106.4; melting point 1,552°C; boiling point 3,140°C; specific gravity 12.02 (20°C); valence 2, 3, 4. It is used as a catalyst in hydrogenation and in alloys for making electrical contacts and jewelry. As early as 1700, miners in Brazil were aware of a metal they called ouro podre, ‘worthless gold,’ which is a native alloy of palladium and gold. However, it was not from this that palladium was first extracted, but from platinum, and this was achieved in 1803 by William Wollaston. He noted that when he dissolved ordinary platinum in aqua regia (nitric acid + hydrochloric acid) not all of it went into solution.

It left a residue from which he eventually extracted palladium. He did not announce his discovery but put the new metal on sale as‘new silver’. Richard Chenevix purchased some, investigated it, and declared it to be an alloy of mercury and platinum. In February 1805 Wollaston revealed himself as its discoverer and gave a full and convincing account of the metal and its properties.

Palladium does not react with oxygen at standard temperatures (and thus does not tarnish in air). Palladium heated to 800 °C will produce a layer of palladium(II) oxide (PdO). It tarnishes lightly in a moist atmosphere containing sulfur. It films with defects produced by alpha particle bombardment at low temperature exhibit superconductivity having Tc=3.2 K.

Occurrences and Properties of Palladium

Palladium has been found uncombined in nature, in Brazil, but most is found in sulfide minerals such as braggite. Ore deposits of palladium and other PGMs are rare. The most extensive deposits have been found in the norite belt of the Bushveld Igneous Complex covering the Transvaal Basin in South Africa; the Stillwater Complex in Montana, United States; the Sudbury Basin and Thunder Bay District of Ontario, Canada; and the Norilsk Complex in Russia. Recycling is also a source, mostly from scrapped catalytic converters. The numerous applications and limited supply sources result in considerable investment interest. Palladium can be found as a free metal alloyed with gold and other platinum-group metals in placer deposits of the Ural Mountains, Australia, Ethiopia, North and South America.

It is extracted commercially as a by-product of nickel refining. It is also extracted as a by-product of copper and zinc refining. It is also produced in nuclear fission reactors and can be extracted from spent nuclear fuel, though this source for palladium is not used. None of the existing nuclear reprocessing facilities are equipped to extract palladium from the high-level radioactive waste. It is generally produced commercially as a by-product in the refining of copper and nickel ores. Russia, South Africa, Canada, and the United States were the world’s leading producers of palladium in the early 21st century.

Palladium is not tarnished by the atmosphere at ordinary temperatures. Surfaces of palladium are excellent catalysts for chemical reactions involving hydrogen and oxygen, such as the hydrogenation of unsaturated organic compounds. Under suitable conditions (80 °C [176 °F] and 1 atmosphere), palladium absorbs more than 900 times its own volume of hydrogen. Most palladium is used in catalytic converters for cars. It is also used in jewellery and some dental fillings and crowns. White gold is an alloy of gold that has been decolourised by alloying with another metal, sometimes palladium. It is used in the electronics industry in ceramic capacitors, found in laptop computers and mobile phones. These consist of layers of palladium sandwiched between layers of ceramic. Finely divided palladium is a good catalyst and is used for hydrogenation and dehydrogenation reactions. Hydrogen easily diffuses through heated palladium and this provides a way of separating and purifying the gas.

Palladium is a metal with low toxicity. It is poorly absorbed by human body when digested. Plants such as the water hyacinth are killed by low levels of palladium salts, but most other plants tolerate it, although tests show that, at levels above 0.0003%, growth is affected. High doses of palladium could be poisonous; tests on rodents suggest it may be carcinogenic, though no clear evidence indicates the element harms humans.