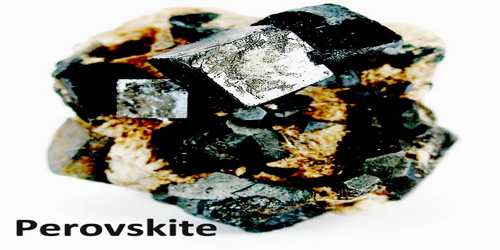 Perovskite is named for a Russian mineralogist, Count Lev Aleksevich von Perovski. The mineral was discovered and named by Gustav Rose in 1839 from samples found in the Ural Mountains. Now it is a well known and recognized as a common mineral in aluminum and silica poor rock types such as nepheline syenites, carbonatites, kimberlites and melilites as well as some contact metamorphic marbles.

It lends its name to the class of compounds which have the same type of crystal structure as CaTiO3 (XIIA2+VIB4+X2−3) known as the perovskite structure.

Occurrences, Structure and Properties of Peroveskite

Perovskite occurs as small anhedral to subhedral crystals filling interstices between the rock-forming silicates. It is also found in contact carbonate skarns at Magnet Cove, Arkansas, in altered blocks of limestone ejected from Mount Vesuvius, in chlorite and talc schist in the Urals and Switzerland. Perovskites may be structured in layers, with the above ABO3 structure separated by thin sheets of intrusive material. Aurivillius phase: the intruding layer is composed of a [Bi2O2]2+ ion, occurring every n ABO3 layers, leading to an overall chemical formula of [Bi2O2]-A(n−1)B2O7.

Perovskite is a common mineral in the Ca-Al-rich inclusions found in some chondritic meteorites. Crystals of perovskite appear as cubes, but this is deceiving. Perovskite is actually pseudocubic (or “falsely shaped” in a loose translation from the Greek). It is really orthorhombic in symmetry, but its structure is very close to isometric. The titaniums and oxygens compose a framework structure in which TiO6 octahedrons are connected at each corner to other TiO6 octahedrons. If the connections were at perfect 90 degree angles then the structure would be isometric. However the large ions, such as calcium and some rare earth metals that are needed to balance the formula are too large to fit comfortably between the octahedrons. This causes a bending or twisting of the octahedrons and a distortion of the structure to orthorhombic symmetry. But the structure is still close to being isometric and it can therefore create crystals that are close to being cubes. Specimens can remind one of darkly colored cubes of galena. But galena’s better metallic luster, greater density and perfect cleavage prevent anyone from permanently confusing the two.