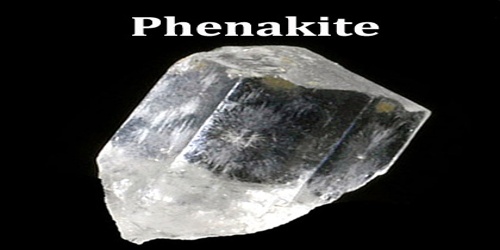 Phenakite is a colourless or white glassy mineral consisting of beryllium silicate in hexagonal crystalline form: occurs in veins in granite with formula: Be2SiO4. It is an attractive and rare mineral, forming in aesthetic crystals that are highly desirable to collectors. It is named from the the Greek word phenakos – “deceiver”, describing this mineral’s visual similarity to Quartz. There is no cleavage, and the fracture is conchoidal. The Mohs hardness is high, being 7.5 – 8; the specific gravity is 2.96. Also as prismatic crystals that is usually twinned as penetration twins. Crystals are usually vertically striated. Also in interconnected elongated micro-crystals and in blocky, complex rhombohedrons with pyramidal points. Prismatic crystals usually have a partially pyramidal termination with a flattened head, although sometimes the pyramid is complete. Also occurs radiating and massive.

Occasionally it is used as a gemstone, phenakite occurs as isolated crystals, which are rhombohedral with parallel-faced hemihedrism, and are either lenticular or prismatic in habit: the lenticular habit is determined by the development of faces of several obtuse rhombohedra and the absence of prism faces.

Production and Occurrence of Phenakite

Phenakite is found in gem quality in very few locations in the world.  It’s found in granite pegmatites.  Russia, Burma and Brazil have been sources of gem phenakite.  More recently deposits have been found in Madagascar, and in 2008 a significant deposit of beautifully etched and unusually large phenakite crystals was found in Nigeria.  These Nigerian stones have been given the name “Okuta-Didan” which is the Yoruba term for “shining stone,” a logical name given the brilliance of the Nigerian gems.  Production has been intermittent since then, and the mineral collector market has purchased many of the crystals due to their stunning etching patterns. Phenakite is harder than quartz and at 7.5-8 on the Mohs scale–nearly as hard as topaz.  It also has a higher refractive index at 1.650-1.695.  This makes it both more durable and more brilliant.  To many the appearance of a finely faceted phenakite is reminiscent of diamond, but it lacks the high dispersion of diamond so the brilliance has a “colder” look to it.  Because of its rarity, phenakite remains a collector’s gemstone. For gem purposes the stone is cut in the brilliant form, of which there are two fine examples, weighing 34 and 43 carats (6.8 and 8.6 g), in the British Museum. The indices of refraction are higher than those of quartz, beryl or topaz; a faceted phenakite is consequently rather brilliant and may sometimes be mistaken for diamond. Phenakite makes an excellent choice for jewelry due to its hardness and toughness and excellent brilliance. It makes a unique replacement for a diamond in ring and its relative affordability means that it can be. It is used in crystal healing lore for all types of healing as it has the extremely high vibration that can multiply the energies of other stones used in crystal healing.