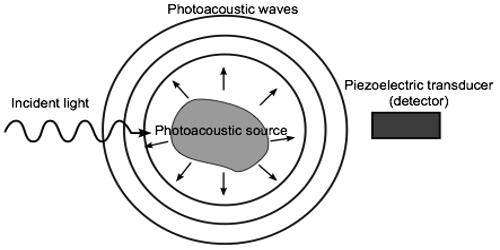 The photoacoustic effect or optoacoustic effect is the formation of sound waves following light absorption in a material sample. It relies on the differential thermoelastic expansion, which can be measured as wideband ultrasound emission of materials or tissues excited with nonionizing electromagnetic waves, such as, short-pulsed laser light. In order to obtain this effect, the light intensity must vary, either periodically (modulated light) or as a single flash. The photoacoustic effect is quantified by measuring the formed sound with appropriate detectors, such as microphones or piezoelectric sensors. Although the photoacoustic effect is not a new discovery, exploiting it for diagnostic imaging in oncology, neurology, cardiology, and ophthalmology is a relatively recent concept. The time variation of the electric output (current or voltage) from these detectors is the photoacoustic signal.

These measurements are useful to determine certain properties of the studied sample. For example, in photoacoustic spectroscopy, the photoacoustic signal is used to obtain the actual absorption of light in either opaque or transparent objects. Photoacoustic imaging combines the good contrast attainable in optical imaging with the high resolution of ultrasound. To use this imaging method, a technician illuminates the tissue of interest with a short-pulse, non-ionizing laser at close proximity. It is useful for substances in extremely low concentrations because very strong pulses of light from a laser can be used to increase sensitivity and very narrow wavelengths can be used for specificity. It is a phenomenon in which sound waves are generated in a vessel by intermittently irradiating a sample placed in a hermetically sealed vessel in sunlight. Furthermore, photoacoustic measurements serve as a valuable research tool in the study of the heat evolved in photochemical reactions, particularly in the study of photosynthesis. Understanding the effect requires knowledge of both acoustic and thermal waves, making this an interesting problem in the application of fundamental wave concepts and techniques.