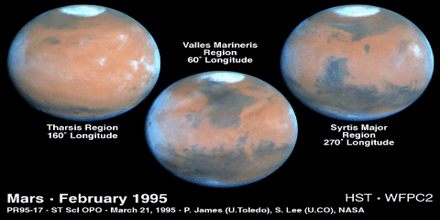 Major purpose of this lecture is to present on physical features on Mars. Mars has a striking red appearance, and in its most favorable position for viewing, when it is opposite the sun, it is twice as bright as Sirius, the brightest star. Mars has a diameter of 4,200 mi (6,800 km), just over half the diameter of the earth, and its mass is only 11% of the earth’s mass. The planet has a very thin atmosphere consisting mainly of carbon dioxide (95%) with some nitrogen, argon, oxygen, and other gases.