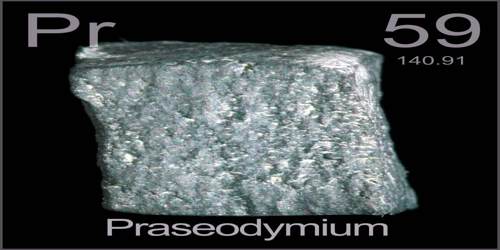 Praseodymium is a soft, malleable, silvery metallic element of the lanthanide series that develops a green tarnish in air. It is the third member of the lanthanide series and is traditionally considered to be one of the rare-earth metals. Its atomic number 59; element symbol is Pr. atomic weight 140.908; melting point 935°C; boiling point 3,127°C; specific gravity 6.8; valence 3, 4. It is used to add a yellow tint to glass and ceramics and to make the glass used in welding goggles. In 1841, Carl Mosander separated two ‘elements’, didymium and lanthanum, from cerium. Although didymium was considered as an element for several years, scientists suspected didymium was in fact a mixture of elements. There suspicions were confirmed when Bohuslav Brauner from Prague proved that the atomic spectrum of didymium was not similar to that of a pure metal. However, Brauner failed to separate the elements of didymium. Following this, Carl Auer von Welsbach, an Austrian chemist succeeded in splitting didymium into oxides of neodymium and praseodymium in 1885. Praseodymium was named after the Greek words ‘prasios didymos’ which means ‘green twin’ as it behaves like lanthanum.

Around 32 isotopes of praseodymium have been observed so far, which include 121Pr to 154Pr. Praseodymium has only one naturally- occurring stable isotope, 141Pr.

Occurrences, production and Properties of Praseodymium

Praseodymium occurs along with other lanthanide elements in a variety of minerals. The two principal sources are monazite and bastnaesite. It is extracted from these minerals by ion exchange and solvent extraction. It is not particularly rare, making up 9.1 mg/kg of the Earth’s crust. This value is between those of lead (13 mg/kg) and boron (9 mg/kg), and makes praseodymium the fourth-most abundant of the lanthanides, behind cerium (66 mg/kg), neodymium (40 mg/kg), and lanthanum (35 mg/kg); it is less abundant than the rare-earth elements yttrium (31 mg/kg) and scandium (25 mg/kg). Praseodymium can be prepared by reducing the mixture of anhydrous chloride and fluoride with calcium. Commercially, it is recovered from monazite sand and bastnasite by extraction processes and ion exchange techniques.

Praseodymium is a metal that is silver in color. At room temperature, this element is solid, but it is soft enough that it can be molded. Praseodymium has an atomic mass of 140.91 AMU and an atomic number of 59. Atomic number is a number that dictates a number of protons found in the nucleus of the element. Its elements can be classified based on their physical states (States of Matter) e.g. gas, solid or liquid. This element is a solid. Praseodymium is classified as an element in the Lanthanide series as one of the “Rare Earth Elements” which can located in Group 3 elements of the Periodic Table and in the 6th and 7th periods. The Rare Earth Elements are divided into the Lanthanide and Actinide series. The elements in the Lanthanide series closely resemble lanthanum, and one another, in their chemical and physical properties. Their compounds are used as catalysts in the production of petroleum and synthetic products. Praseodymium is otherwise not known to have a biological role in any other organisms, but is not very toxic either. Intravenous injection of rare earths into animals has been known to impair liver function, but the main side effects from inhalation of rare-earth oxides in humans come from radioactive thorium and uranium impurities. Praseodymium is used in a variety of alloys. The high-strength alloy it forms with magnesium is used in aircraft engines. Mischmetal is an alloy containing about 5% praseodymium and is used to make flints for cigarette lighters. Praseodymium is also used in alloys for permanent magnets. Along with other lanthanide elements, it is used in carbon arc electrodes for studio lighting and projection.

Praseodymium salts are also used to colour glasses, enamel and glazes an intense and unusually clean yellow. Praseodymium oxide is a component of didymium glass (along with neodymium). This glass is used in goggles used by welders and glassmakers, because it filters out the yellow light and infrared (heat) radiation.