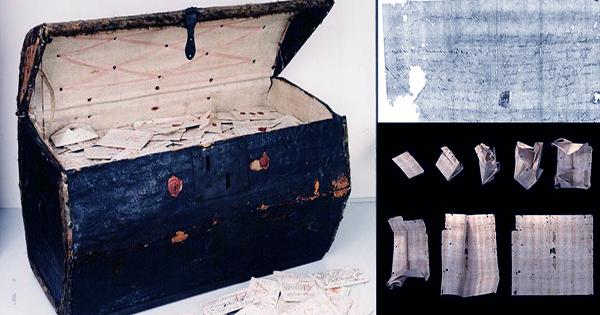 Long before digital encryption, a wide range of methods used to hide the content of letters from Prize’s eyes. Centuries after the deaths of both the author and the intended recipient, scientists have worked on how to learn what written without damaging the letter. Before envelopes, mass-produced letter-writers developed a kind of origami known as letterlocking, where a letter written, the paper folded to hide its contents, sometimes adding a wax seal for extra protection.

This creates a dilemma for archivists and historians. Should they open a letter that can provide important insights into a person’s past life, destroy seals and folds in the process, or leave the content unknown? The invention of X-rays brought an alternative, making it possible to read old letters without breaking the seal or damaging the document. However, until now it was only effective where there were a few common folds in the letters. The problem of multiple complex folds, used for documents that are more secret came back again where it started before modern technology. Now an unexpected collaboration has changed that.

Dentistry Professor Graham Davis of Queen Mary University of London in a statement, “We’ve created our X-ray scanner to achieve unprecedented sensitivity to the mineral content of teeth, which is invaluable in dental research.”
“However, this high sensitivity has also made it possible to resolve certain types of ink on paper and leather.” It proved vital to understand how a letter folded to explore its message as well as technology. This no easy task, as letterlocking evolved into a fine art, with regional variations that changed over time.

Davis’s colleagues investigated 250,000 old letters to create a class of letterlocking methods, some of which enabled the recipient to determine whether the letter delivered in transit without a seal. This allows the team to program the scanners, as it should face writing in a specific letter. A more powerful version of precision X-ray machines, Davis could then discover metallic tiny marks in the ink, creating a readable image. “We’ve been able to use our scanners for X-ray history,” said David Mills. The technique then applied to the contents of Brian Trunk, a collection of 300-year-old unplanned letters, of which 577 never opened.

Nature Communications describes the content of Davis, Mills, and an interdisciplinary force DB-1627 a Brian letter. “This includes a request from Jacques Sennacques for a certified copy of Daniel Le Purse’s death notice to Pierre Le Purse, a French merchant in The Hague on July 31, 1697,” the report said. Probably not romantic or exciting, but a glimpse into the lives of people in those days who may need such death notices to gain access to property. Three more unchanged letters from the trunk fell in the same manner, one of the more than 2,500 that had already published, used to test the process.

The authors said, “We have learned that letters can reveal a lot more if left open. Using virtual revelations to read an intimate story that has never seen the light – and never reached its recipient – is truly remarkable.”

Anyone who is disappointed with the contents of DB-1627 may want to know about the documents seized from other occupied ships in 17th-19th century, a powerful archive of 160,000 British ships, prize papers, many of which are never open did not.