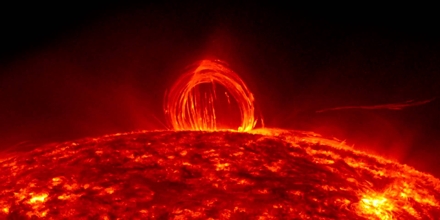 Solar flares are a violent explosion above the suns surface. A large amount of energy is released. Solar flares may last for 10 mins and will produce more energy than a million hydrogen bombs. There is a peak in this type of activity ever 10-11 yrs, during which large numbers of charged particles are released at very high speeds. This results in the production of a magnetic field that interacts with the earths magnetic field. It is a sudden flash of brightness observed near the Sun’s surface.