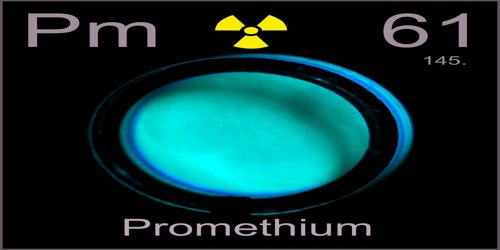 Promethium is a radioactive metallic element of the lanthanide series, which is does not occur in nature but is prepared through the fission of uranium. It is a chemical element with symbol Pm. Its atomic number 61; melting point 1,168°C; boiling point 2,460°C; valence 3. It has 17 isotopes, one of which is used to make long-lived miniature batteries that work at extreme temperatures for up to five years. The longest-lived isotope, Pm 147, has a half-life of 2.5 years and is used as a source of beta rays. In 1902, Bohuslav Branner speculated that there should be an element in the periodic table between neodymium and samarium. He was not to know that all its isotopes were radioactive and had long disappeared. Attempts were made to discover it and several claims were made, but clearly all were false. However, minute amounts of promethium do occur in uranium ores as a result of nuclear fission, but in amounts of less than a microgram per million tonnes of ore.

In 1939, the 60-inch cyclotron at the University of California was used to make promethium, but it was not proven. Finally element 61 was produced in 1945 by Jacob .A. Marinsky, Lawrence E. Glendenin, and Charles D. Coryell at Oak Ridge, Tennessee. They used ion-exchange chromatography to separate it from the fission products of uranium fuel taken from a nuclear reactor.

Occurrences, Production and Properties of Promethium

Promethium’s longest-lived isotope has a half-life of only 18 years. For this reason it is not found naturally on Earth. It can be formed in nature as a product of spontaneous fission of uranium-238. Only trace amounts can be found in naturally occurring ores: a sample of pitchblende has been found to contain promethium at a concentration of four parts per quintillion (1018) by mass. Uranium is thus “responsible” for 560 g of promethium in Earth’s crust. It has also been identified in the spectrum of the star HR 465 in Andromeda; it also has been found in HD 101065 (Przybylski’s star) and HD 965. Because of the short half-life of promethium isotopes, they should be formed near the surface of those stars. There are two possible sources for natural promethium: rare decays of natural europium-151 (producing promethium-147), and uranium (various isotopes).

Promethium can be produced by irradiating neodymium and praseodymium with neutrons, deuterons and alpha particles. It can also be prepared by ion exchange of nuclear reactor fuel processing wastes. Promethium-147 is produced in large quantities (compared to other isotopes) by bombarding uranium-235 with thermal neutrons. The output is relatively high, at 2.6% of the total product. Another way to produce promethium-147 is via neodymium-147, which decays to promethium-147 with a short half-life. Neodymium-147 can be obtained either by bombarding enriched neodymium-146 with thermal neutrons or by bombarding a uranium carbide target with energetic protons in a particle accelerator. Another method is to bombard uranium-238 with fast neutrons to cause fast fission, which, among multiple reaction products, creates promethium-147. Promethium has a double hexagonal close packed (dhcp) structure and a hardness of 63 kg/mm2. This low-temperature alpha form converts into a beta, body-centered cubic (bcc) phase upon heating to 890 °C. Most promethium is used only in research. A little promethium is used in specialised atomic batteries. These batteries have a useful lifetime of about five years. These are roughly the size of a drawing pin and are used for pacemakers, guided missiles and radios. The radioactive decay of promethium is used to make a phosphor give off light and this light is converted into electricity by a solar cell.

Promethium-147 was mixed with zinc sulfide phosphorescent material, resulting in radioluminescent paint. It was used to paint the face of watches so people could see the time in the dark. Promethium can also be used as a source of x-rays and radioactivity in measuring instruments.