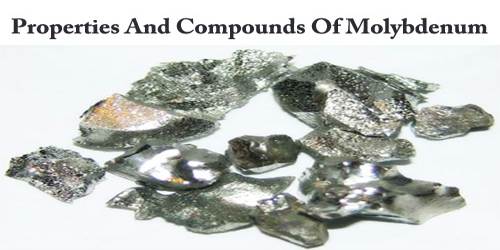 Properties And Compounds Of Molybdenum

Molybdenum (Mo) is the 54th most common element in the Earth’s crust. It is a chemical element with the symbol Mo and atomic number 42, silver-gray refractory metal of Group 6 (VIb) of the periodic table, used to impart superior strength to steel and other alloys at high temperature. The name is from Neo-Latin molybdaenum, from Ancient Greek Μόλυβδος molybdos, meaning lead, since its ores were confused with lead ores.

Molybdenum does not occur naturally as a free metal on Earth; it is found only in various oxidation states in minerals. The free element, a silvery metal with a gray cast, has the sixth-highest melting point of any element. It readily forms hard, stable carbides in alloys, and for this reason most of world production of the element (about 80%) is used in steel alloys, including high-strength alloys and superalloys.

The Swedish chemist Carl Wilhelm Scheele had demonstrated (c. 1778) that the mineral molybdaina (now molybdenite), for a long time thought to be a lead ore or graphite, certainly contains sulfur and possibly a previously unknown metal. At Scheele’s suggestion, Peter Jacob Hjelm, another Swedish chemist, successfully isolated the metal (1782) and named it molybdenum, from the Greek molybdos, “lead.”

Occurrence and Properties of Molybdenum – 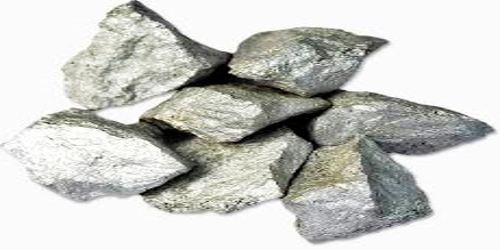 Molybdenite is the chief mineral ore, with wulfenite being less important. Some molybdenite is obtained as a by-product of tungsen and copper production. The main mining areas are the USA, Chile, Canada and Russia, with world production being around 90.000 tonnes per year, and reserves amounting to 12 million tonnes of which 5 million tonnes are in the USA. World production is around 200,000 tonnes per year.

Historically, the Knaben mine in southern Norway, opened in 1885, was the first dedicated molybdenum mine. It was closed in 1973 but was reopened in 2007. and now produces 100,000 kilograms (98 long tons; 110 short tons) of molybdenum disulfide per year. Large mines in Colorado (such as the Henderson mine and the Climax mine) and in British Columbia yield molybdenite as their primary product, while many porphyry copper deposits such as the Bingham Canyon Mine in Utah and the Chuquicamata mine in northern Chile produce molybdenum as a byproduct of copper mining.

Physical Properties: In its pure form, molybdenum is a silvery-grey metal with a Mohs hardness of 5.5 and a standard atomic weight of 95.95 g/mol. It has a melting point of 2,623 °C (4,753 °F); of the naturally occurring elements, only tantalum, osmium, rhenium, tungsten, and carbon have higher melting points. It has one of the lowest coefficients of thermal expansion among commercially used metals.

Chemical Properties: Molybdenum is a transition metal with an electronegativity of 2.16 on the Pauling scale. It does not visibly react with oxygen or water at room temperature. Weak oxidation of molybdenum starts at 300 °C (572 °F); bulk oxidation occurs at temperatures above 600 °C, resulting in molybdenum trioxide. Like many heavier transition metals, molybdenum shows little inclination to form a cation in aqueous solution, although the Mo3+ cation is known under carefully controlled conditions.

For molybdenum the chief ore is molybdenite molybdenum disulfide, MoS2 but molybdates such as lead molybdate, PbMoO4 (wulfenite), and MgMoO4 are also found. Most commercial production is from ores containing the mineral molybdenite. The concentrated mineral is usually roasted in an excess of air to yield molybdenum trioxide (MoO3), also called technical molybdic oxide, which, after purification, can be reduced with hydrogen to the metal. Subsequent treatment depends on the ultimate use of molybdenum. Molybdenum may be added to steel in the furnace in the form of either technical oxide or ferromolybdenum. Ferromolybdenum (containing at least 60 percent molybdenum) is produced by igniting a mixture of technical oxide and iron oxide. Molybdenum metal is produced in the form of a powder by hydrogen reduction of chemically pure molybdic oxide or ammonium molybdate, (NH4)2MoO4. The powder is converted to massive metal by the powder-metallurgy process or by the arc-casting process.

Others speculated that it contained a new element but it proved difficult to reduce it to a metal. It could be converted to an oxide which, when added to water, formed an acid we now know as molybdic acid, H2MoO4, but the metal itself remained elusive. The broad range of oxidation states of molybdenum is reflected in various molybdenum chlorides:

Molybdenum-base alloys and the metal itself have useful strength at temperatures above which most other metals and alloys are molten. The major use of molybdenum, however, is as an alloying agent in the production of ferrous and nonferrous alloys, to which it uniquely contributes hot strength and corrosion resistance, e.g., in jet engines, combustion liners, and afterburner parts. It is one of the most effective elements for increasing hardenability of iron and steel, and it also contributes to the toughness of quenched and tempered steels. The high corrosion resistance needed in the stainless steels used for processing pharmaceuticals and in the chromium steels for automotive trim is uniquely enhanced by small additions of molybdenum. Metallic molybdenum has been used for such electric and electronic parts as filament supports, anodes, and grids. Rod or wire is used for heating elements in electric furnaces operating up to 1,700 °C (3,092 °F). Coatings of molybdenum adhere firmly to steel, iron, aluminum, and other metals and show excellent resistance to wear.

Molybdenum forms hard, refractory, and chemically inert interstitial compounds with boron, carbon, nitrogen, and silicon upon direct reaction with those elements at high temperatures. The most common isotopic molybdenum application involves molybdenum-99, which is a fission product. It is a parent radioisotope to the short-lived gamma-emitting daughter radioisotope technetium-99m, a nuclear isomer used in various imaging applications in medicine. In 2008, the Delft University of Technology applied for a patent on the molybdenum-98-based production of molybdenum-99.