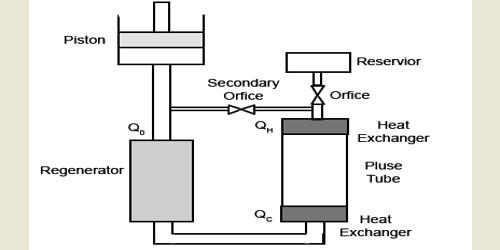 Pulse-tube Refrigerators can be operated over a wide range of temperatures. The pulse tube refrigerator (PTR) or pulse tube cryocooler is a developing technology that emerged largely in the early 1980s with a series of other innovations in the broader field of thermoacoustics. Cryocoolers without moving parts at low temperatures have many advantages: there is no need for a liquid–helium bath cryostat with its infrastructure, the cost can be low, the reliability high, there are low mechanical vibrations, and the magnetic interferences are small. In contrast with other cryocoolers (e.g. Stirling cryocooler and GM-refrigerators), this cryocooler can be made without moving parts in the low-temperature part of the device, making the cooler suitable for a wide variety of applications. The loss generated due to direct current gas flow in the pulse tube refrigerator (PTR) is one of the major problems which significantly affect the cooling performance.

A pulse tube cooler does not require the input of any cryogens, yet two-stage pulse tube refrigerators have achieved temperatures below 2 K. Additionally, pulse tube coolers have no moving parts at the cold end. The PTR can reach lower temperatures efficiently with higher heat lift at the corresponding temperature than other typical single-stage Stirling-type PTRs.  It generates temperature fluctuation at the cold end of the PTR. When the working gas is compressed at cryogenic temperature, the acoustic power (PV power) can be directly transmitted through the regenerator to the pulsating tube without experiencing an unnecessary precooling process. This significantly increases their reliability and lifetime while decreasing the potential to couple vibrations into the sample mounted at the cold end. The Pulse-tube Refrigerator is the first unit applied to the temperature range and load level needed for typical food freezers and laboratory freezers.

Pulse tube cryocoolers are used in industrial applications such as semiconductor fabrication and in military applications such as for the cooling of infrared sensors. The pulse tube works by transporting heat against a temperature gradient in a process called surface heat pumping. Surface heat pumping is expected to occur in many systems subjected to pressure oscillations. Pulse tubes are also being developed for the cooling of astronomical detectors where liquid cryogens are typically used, such as the Atacama Cosmology Telescope or the Qubic experiment. Pulse-tube Refrigerators offer increased reliability, fewer moving parts, and much lower cold-end vibration than other spacecraft or commercial refrigeration concepts.

PTRs are used as precoolers of dilution refrigerators. These units can be used in numerous space and commercial refrigeration applications, including food refrigerator/freezers, laboratory freezers, and freeze dryers. Pulse-tube Refrigerators can also be used to cool detectors and electronic devices. Pulse tubes are particularly useful in space-based telescopes such as the James Webb Space Telescope where it is not possible to replenish the cryogens as they are depleted. It has also been suggested that pulse tubes could be used to liquefy oxygen on Mars.