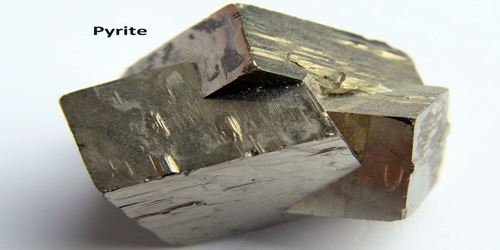 Pyrite (FeS2) is a silver to yellow, metallic, cubic mineral. Pyrite often crystallizes in cubes or octahedrons but also occurs as shapeless masses of grains. It occurs in most types of rocks, and is used as a source of iron and in making sulfur dioxide. It is a polymorph of marcasite. The name pyrite comes from pyrite lithos, which, in Greek, means ‘stone which strikes fire’ in reference to the tendency of the mineral to spark when struck against steel. In fact, pyrite was used for that purpose in early flintlock rifles. Pyrite has a nickname that has become famous – “Fool’s Gold.” The mineral’s gold color, metallic luster, and high specific gravity often cause it to be mistaken for gold by inexperienced prospectors. However, pyrite is often associated with gold. The two minerals often form together, and in some deposits pyrite contains enough included gold to warrant mining.

Pyrite usually forms cuboid crystals, sometimes forming in close association to form raspberry-shaped masses called framboids. However, under certain circumstances, it can form anastamozing filaments or T-shaped crystals. Pyrite can also form almost perfect dodecahedral shapes known as pyritohedra and this suggests an explanation for the artificial geometrical models found in Europe as early as the 5th century BC.

Cattierite (CoS2) and vaesite (NiS2) are similar in their structure and belong also to the pyrite group. Bravoite is a nickel-cobalt bearing variety of pyrite, with > 50% substitution of Ni2+ for Fe2+ within pyrite.

Occurrences and Properties of Pyrite

Pyrite occurs in numerous shapes and habits. The smaller crystal aggregates may give off a beautiful glistening effect in light, and the larger crystals may be perfectly formed, including fascinating cubes, penetration twins, and other interesting crystal forms. The perfect cubes of Pyrite embedded in a matrix from the famous Spanish mines are especially treasured among collectors. Many of these specimens have fallen out of the matrix and have been repaired by having them glued back into the matrix. The mineral is found in many sedimentary rocks, such as limestone, shale and coal, as well as in metamorphic rocks like schist. It is a very common mineral in ore deposits, where it is found along with other metal-containing minerals, including gold. And yet pyrite is not mined for its iron, as the metal is difficult to extract from it.

The only common mineral that has properties similar to pyrite is marcasite, a dimorph of pyrite with the same chemical composition but an orthorhombic crystal structure. Marcasite does not have the same brassy yellow color of pyrite. Instead it is a pale brass color, sometimes with a slight tint of green. Marcasite is more brittle than pyrite and also has a slightly lower specific gravity at 4.8. Pyrite has the same chemical formula as the rarer mineral Marcasite, but it crystallizes in a different crystal system, thereby classifying it as a separate mineral species. Aggregates of iron sulfide (FeS2) where the crystal structure cannot be determined without complex analyzing material may be wrongly labeled by dealers. Some Pyrite specimens are labeled as Marcasite and some Marcasite specimens as Pyrite.

Pyrite used to be an important ore for the production of sulfur and sulfuric acid. Today most sulfur is obtained as a byproduct of natural gas and crude oil processing. Some sulfur continues to be produced from pyrite as a byproduct of gold production. The most important use of pyrite is as an ore of gold. Pyrite is occasionally used as a gemstone. It is fashioned into beads, cut into cabochons, faceted, and carved into shapes.