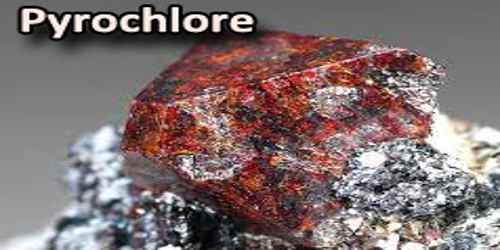 Pyrochlore is a complex oxide mineral (Na,Ca)2Nb2O6(OH,F), which is composed of niobium, sodium, and calcium that forms brown to black, glassy octahedral crystals and irregular masses. Pyrochlore crystallizes in the isometric symmetry class and forms fine octahedral crystals that are typically and characteristically modified by other isometric forms.

Other members of pyrochlore’s namesake group the Pyrochlore Group also form octahedrons, but can sometimes be reliably differentiated by color, streak and other characteristics. Pyrochlore was first described in 1826 for an occurrence in Stavern (Fredriksvärn), Larvik, Vestfold, Norway. The name is from the Greek πῦρ, fire, and χλωρός, green because it typically turns green on ignition in classic blowpipe analysis

Tantalum atoms replace niobium atoms in the chemical structure, so that pyrochlore forms a solid-solution series with the mineral microlite (Na,Ca)2Ta2O6(O,OH,F). It is generally contains substantial amounts of radioactive elements called rare earths and this produces the radioactivity in this mineral. Pyrochlore is therefore a member of the informal group of minerals called the Rare Earth Oxides.

Occurrences, Structure and Properties of Pyrochlore

Pyrochlore is found in alkaline rocks, their associated pegmatites, in metamorphic contact zones, and in greisens, which is a type of granite composed chiefly of quartz and light green mica. Its crystals are usually well formed (euhedral), occurring usually as octahedra of a yellowish or brownish color and resinous luster. It is commonly metamict due to radiation damage from included radioactive elements. Such rocks have been recognized at Stavern and Lurvik, Nor.; Alnö, Swed.; Brocq en Menet, Fr.; and in Maine, Wisconsin, California, and Colorado, U.S. Microlite occurs in the albitized zones of granite pegmatites, as at Låndas, Nor.; Varuträsk, Swed.; Igaliko, Greenland; and in Connecticut, U.S. Pyrochlore ore typically contains greater than 0.05% of naturally occurring radioactive uranium and thorium. Pyrochlore is an end member of a solid-solution series between itself and the mineral microlite. The two minerals have similar structures and properties, but microlite is the tantalum rich end member and pyrochlore is the niobium rich end member. The generally lighter pyrochlore is found in a rather unusual igneous rock called a carbonatite, which is composed mostly of calcite and alkalic pegmatites called nepheline syenites. The overall more common mineral microlite is found mostly in granitic pegmatite dikes and more rarely in the carbonatites. Pyrochlore is the more impure mineral of the two because it is more often accepting of the inclusion of elements such as tantalum, titanium, iron and uranium as well as the previously mentioned rare earth metals into its structure. The pyrochlore structure is a super structure derivative of the simple fluorite structure (AO2 = A4O8), where the A and B cations are ordered along the ⟨110⟩ direction. The additional anion vacancy resides in the tetrahedral interstice between adjacent B-site cations. These systems are particularly susceptible to geometrical frustration and novel magnetic effects.