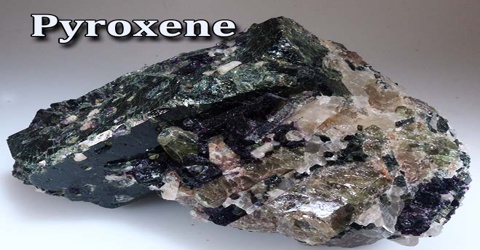 Pyroxene is any of a series of dark silicate minerals having the general chemical formula ABSi 2 O 6, where A is either calcium (Ca), sodium (Na), magnesium (Mg), or iron (Fe), and B is magnesium, iron, chromium (Cr), manganese (Mn), or aluminum (Al). The general formula is XY(Si,Al)2O6, where X represents calcium, sodium, iron+2 and magnesium and more rarely zinc, manganese and lithium and Y represents ions of smaller size, such as chromium, aluminium, iron+3, magnesium, cobalt, manganese, scandium, titanium, vanadium and even iron+2. The name pyroxene is derived from the Ancient Greek words for fire (πυρ) and stranger (ξένος). Pyroxenes were so named because of their presence in volcanic lavas, where they are sometimes seen as crystals embedded in volcanic glass; it was assumed they were impurities in the glass, hence the name “fire strangers”.

Pyroxenes are vary in color from white to dark green or black and are characterized by a rectangular-shaped cross section. They can be either monoclinic or orthorhombic and occur in igneous and metamorphic rocks. The minerals enstatite, diopside, and augite are pyroxenes.

The chemical composition of minerals of the pyroxene group can be expressed by the general formula XYZ2O6, in which X= Na+, Ca2+, Mn2+, Fe2+, Mg2+, Li+; Y= Mn2+, Fe2+, Mg2+, Fe3+, Al3+, Cr3+, Ti4+; and Z= Si4+, Al3+. The range of possible chemical substitutions in pyroxene is constrained by the sizes of the available sites in the structure and the charge of the substituting cations. Most pyroxenes have only limited substitution of aluminum for silicon in the Z(tetrahedral) site. When a substituting ion differs in charge, electrical neutrality is maintained by coupled substitutions.

Pyroxene minerals are named according to the chemical species occupying the X (or M2) site, the Y (or M1) site, and the tetrahedral T site. Cations in Y (M1) site are closely bound to 6 oxygens in octahedral coordination. Cations in the X (M2) site can be coordinated with 6 to 8 oxygen atoms, depending on the cation size.

Structure and Classification of Pyroxene

The pyroxenes differ compositionally from the amphiboles in two major respects. Pyroxenes contain no essential water in the form of hydroxyls in their structure, whereas amphiboles are considered to be hydrous silicates.

The basic building blocks of the pyroxene structure are single chains of SiO4 tetrahedra. The chains are infinitely long and run parallel to the z-direction. The chain repeats after every two SiO4 tetrahedra. Two silicate chains are joined together via a ribbon of edge-sharing octahedral sites (labelled M1) Together, these make a structural unit often referred to as an “I-beam”. A representative pyroxene structure that illustrates the tetrahedral and octahedral chains in jadeite. The octahedral strips consist of M1 and M2 octahedrons sandwiched between two oppositely pointing tetrahedral chains. The essential feature of all pyroxene structures is the linkage of the silicon-oxygen (SiO4) tetrahedrons by sharing two of the four corners to form continuous chains. The chains, which extend indefinitely parallel to the ccrystallographic axis, have the composition of (SiO3)n.

The pyroxenes can be divided into several groups based on chemistry and crystallography:

Characteristically, pyroxenes are dark green to black in colour, but they can range from dark green to apple-green and from lilac to colourless, depending on the chemical composition.