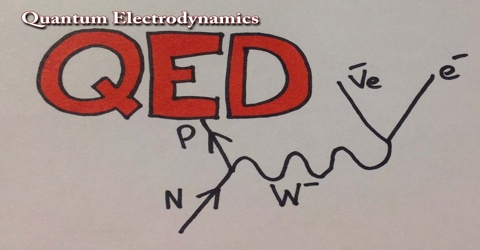 Quantum Electrodynamics (QED) is one of the most well-tested, accurate, and successful theories in physics. Quantum Electrodynamics (QED), quantum field theory of the interactions of charged particles with the electromagnetic field. It describes mathematically not only all interactions of light with matter but also those of charged particles with one another. QED is a relativistic theory in that Albert Einstein’s theory of special relativity is built into each of its equations. Because the behaviour of atoms and molecules is primarily electromagnetic in nature, all of atomic physics can be considered a test laboratory for the theory. QED is a complex and highly mathematical theory that paints a picture of light that is counter-intuitive to everyday human experience. According to QED theory, light exists in a duality consisting of both particle and wave-like properties. More specifically, QED asserts that electromagnetism results from the quantum behavior of the photon, the fundamental “particle” responsible for the transmission electromagnetic radiation.

A quantum field theory of electromagnetism that explains the interactions between electrically charged particles and photons. According to quantum electrodynamics, charged particles interact with one other by emitting or absorbing photons, which are the carriers of the electromagnetic force. Quantum electrodynamics correctly predicts such phenomena as the structure of atoms, and the creation and annihilation of particles. The calculations used to define QED were made more accessible and reliable by a process termed renormalization, independently developed by American physicist Richard Feynman (1918–1988), American physicist Julian Schwinger (1918–1994), and Japanese physicist Shin’ichiro Tomonaga (1906–1979). In essence the work of these three renowned scientists concentrated on making the needed corrections to Dirac’s infinity problems and his advancement of QED theory, which helped reconcile quantum mechanics with Einstein’s special theory of relativity. Their “renormalization” allowed positive infinities to cancel out negative infinities and thus, allowed measured values of mass and charge to be used in QED calculations.

Quantum Electrodynamics (QED) applies to all electromagnetic phenomena associated with charged fundamental particles such as electrons and positrons, and the associated phenomena such as pair production, electron-positron annihilation, Compton scattering, etc. It was used to precisely model some quantum phenomena which had no classical analogs, such as the Lamb shift and the anomalous magnetic moment of the electron. QED was the first successful quantum field theory, incorporating such ideas as particle creation and annihilation into a self-consistent framework. The development of the theory was the basis of the 1965 Nobel Prize in physics, awarded to Richard Feynman, Julian Schwinger and Sin-itero Tomonaga. Quantum Electrodynamics (QED) went on to become, arguably, the best tested theory in science history. Most atomic interactions are electro-magnetic in nature and, no matter how accurate the equipment yet devised, the predictions made by renormalized QED theory hold true. Some tests of QED—for example, predictions of the mass of some subatomic particles—offer results accurate to six significant figures or more. Even with the improvements made by the renormalization of QED, however, the calculations often remain difficult. Although some predictions can be made using one Feynman diagram and a few pages of calculations, others may take hundreds of Feynman diagrams and the access to supercomputing facilities to complete the necessary calculations. The development of QED theory allowed scientists to predict how subatomic particles are created or destroyed. Just as Feynman, Schwinger and Tomonaga’s renormalization of QED allowed for calculation of finite properties relating to mass, energy, and charge-related properties of electrons, physicists hope that such improvements offer a model to improve other gauge theories (i.e., theories which explain how forces, such as the electroweak force, arise from underlying symmetries). The concept of forces such as electromagnetism arising from the exchange of virtual particles has intriguing ramifications for the advancement of theories regarding the working mechanisms underlying the strong, weak, and gravitational forces.