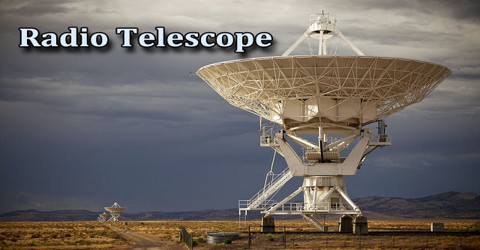 Radio Telescope is an instrument that consists of a radio receiver and antenna system mounted on a wide, bowl-shaped reflector, used to detect radio-frequency emissions from astronomical objects. It is an astronomical instrument consisting of a radio receiver and an antenna system that is used to detect radio-frequency radiation emitted by extraterrestrial sources. Because radio wavelengths are much longer than those of visible light, radio telescopes must be very large in order to attain the resolution of optical telescopes. Radio Telescopes are typically large parabolic (“dish”) antennas similar to those employed in tracking and communicating with satellites and space probes. They may be used singly, or linked together electronically in an array. The reflector and receiver form a parabolic antenna; incoming radio waves are focused by the reflector onto the receiver, where the radio signals are translated into electrical signals for further processing or electronic display.

Radio Telescopes create a picture of the sky, not in visible light, but in radio waves. Radio telescopes look very much like gigantic satellite dishes. Because radio waves have such long wavelengths, their surfaces don’t even need to be fully solid — a wire mesh will suffice, because the waves are too big to fit through the gaps. Radio telescopes also have to avoid interference, and so tend to be placed away from cities, hidden away in valleys to block radio signals from Earth.

How Does a Radio Telescope Work?

Radio telescopes use a symmetric tripod or quadrupod structure to hang a receiver or secondary reflector, and these giant metal legs block some of the incoming radio waves from space and sometimes bounce ground interference into the receivers. It has several main parts: a dish and antenna, a receiver, a detector, and an analyzer.

The dish collects the radio signals from space and focuses them on the antenna. A larger dish will collect more radio waves and lead to a stronger signal at the antenna, so radio telescopes can be huge. The largest individual radio telescope dish in the world is the Arecibo radio telescope located in Puerto Rico, which has a diameter of 305 meters! The receiver takes the radio waves received by the antenna and converts them to electrical signals (voltages). The receiver has to be extremely sensitive, and modern receivers are often kept at below-freezing temperatures, as low as -270 degrees Celsius, to reduce noise from the motion of atoms in the metal.

The detector measures the power density of the electrical signal, which is the necessary to turn the signal into a photo. A higher power density translates into a brighter part of the image.

The analyzer, usually a computer or a device attached to a computer, takes the data and creates an image from it.

Radio telescopes vary widely, but they all have two basic components: (1) a large radio antenna and (2) a radiometer or radio receiver. The most familiar type of radio telescope is the radio reflector consisting of a parabolic antenna, which operates in the same manner as a television satellite dish to focus the incoming radiation onto a small antenna called the feed, a term that originated with antennas used for radar transmissions. This type of telescope is also known as the dish, or filled-aperture, telescope. In a radio telescope the feed is typically a waveguide horn and transfers the incoming signal to the sensitive radio receiver. Solid-state amplifiers that are cooled to very low temperatures to reduce significantly their internal noise are used to obtain the best possible sensitivity. In the simplest form of radio telescope, the receiver is placed directly at the focal point of the parabolic reflector, and the detected signal is carried by cable along the feed support structure to a point near the ground where it can be recorded and analyzed. However, it is difficult in this type of system to access the instrumentation for maintenance and repair, and weight restrictions limit the size and number of individual receivers that can be installed on the telescope.